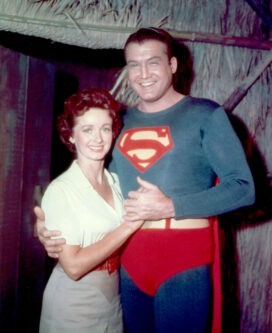 George Reeves played comic-book hero Superman on the 1950s TV series The Adventures of Superman. Reeves was working at the Pasadena Community Playhouse when he was cast as southern suitor Stuart Tarelton in the epic Gone With the Wind (1939, with Clark Gable and Vivien Leigh). He appeared in over three dozen movies after that, including a bit part alongside Ronald Reagan in 1940’s Knute Rockne, All-American. Then Reeves hit it big on TV as Superman. The Adventures of Superman aired from 1952 to 1957 and made Reeves a familiar face across America — so familiar, in fact, that he became seriously concerned about being type-cast as the Man of Steel. Reeves apparently killed himself in 1959, and the widespread explanation was his despondency over his career. He made his final film appearance in 1956, in the Disney feature Westward Ho The Wagons!. His other film credits include Blood and Sand (1941), Rancho Notorious (1952, starring Marlene Dietrich) and Forever Female (1953, starring William Holden).

Reeves was no relation to Steve Reeves (the bodybuilder who played Hercules on film in the 1950s) or to actor Christopher Reeve, who later played Superman in feature films… According to liner notes on Columbia Tristar’s VHS release of From Here to Eternity, Reeves “had a major part in the film until he was severely cut from the release print when preview audiences exclaimed, ‘There’s Superman!’”… Reeves married the former Ellanora Needles in 1940. They had no children and were later divorced… Some controversy still swirls around Reeves’s death. The actor apparently shot himself in the head during a drinking party at his own home. Police ruled the death a suicide, but nobody witnessed the shooting, and some fans feel that and other evidence indicates Reeves was murdered. A 2006 movie about the mystery, Hollywoodland, starred Ben Affleck as Reeves.

Something in Common with George Reeves