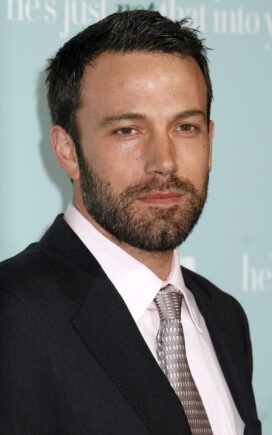 Ben Affleck is a former Hollywood wunderkind who has evolved into a popular leading man and director. He is a two-time winner of the Academy Award, as a screenwriter (for Good Will Hunting, released in 1998) and as a producer (for Argo, 2012, which he also directed and starred in).

When Affleck and his childhood friend Matt Damon were struggling actors from Boston, they wrote and then starred in the 1998 film Good Will Hunting. The film, about a rough Boston townie who is also a math whiz, won them the Oscar for best original screenplay and catapulted both men to stardom.

Ben Affleck had previously appeared in independent films such as Richard Linklater‘s Dazed and Confused (1993) and the Kevin Smith movies Mallrats (1995) and Chasing Amy (1997).

As Good Will Hunting made its mark in Hollywood, he began playing square-jawed heroes in big-budget action movies like Armageddon (1998, with Bruce Willis), and Pearl Harbor (2001, with Josh Hartnett), Daredevil (2003, with his future wife Jennifer Garner). He later played Batman in a series of DC Comics Justice League films, starting with Batman v Superman: Dawn of Justice (2016, with Henry Cavill as Superman).

While building his career as a Hollywood star, Affleck maintained his connection to Smith and continued to appeared in several of his comedies, including Dogma (1999), Jersey Girl (2004) and Clerks II (2006). Affleck then made his directorial debut in 2007 with Gone Baby Gone. As director, Affleck has also done the Boston crime drama The Town (2010, with Jon Hamm), the international spy thriller Argo (2012), which also starred Affleck and won that year’s Oscar for best picture, and the crime drama Live By Night (2016).

Ben Affleck’s other movies as star include Paycheck (2003, based on a story by Philip K. Dick), Hollywoodland (2006, with Affleck as actor George Reeves), State of Play (2009, starring Russell Crowe), The Company Men (2010, starring Tommy Lee Jones) and Gone Girl (2014, starring Rosamund Pike). He starred in the coming-of-age film The Tender Bar (2021) and the psycho-thriller Deep Water (2022, with Ana de Armas).

Early in the 21st century, Ben Affleck was in a high-profile relationship with actress and singer Jennifer Lopez; they were engaged from 2002 until their breakup in 2004. The couple were dubbed “Bennifer” by tabloids. In 2021, Affleck and Lopez reunited, and they married in Las Vegas on July 16, 2022.

Ben Affleck married the actress Jennifer Garner on June 29, 2005, and they have three children: Violet (b. 2005),  Seraphina (b. 2009) and son Samuel (b. 2012). Affleck and Garner announced in 2015 that they would divorce, and the divorce became final in 2018…. Ben Affleck also starred in The Sum of All Fears, becoming the third star to play Tom Clancy hero Jack Ryan; the CIA superstud was played by Harrison Ford and Alec Baldwin in previous films.

Something in Common with Ben Affleck