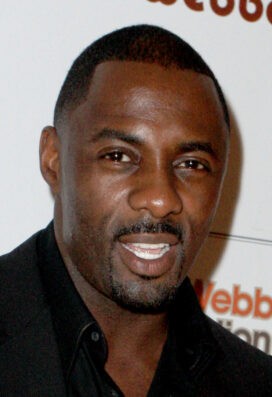 English actor Idris Alba is best known as Stringer Bell in the American television series The Wire (2002-07). He began his professional career in England, but after several years of bit parts in British TV productions, Elba moved to New York in the late 1990s for what seemed better options for a black actor. It worked out — his turn as the ambitious Baltimore drug dealer Stringer Bell in The Wire made him a star — although not really until after the series was over and was widely available for home viewing. That role led to film roles, including 28 Weeks Later (2007), American Gangster (2007, starring Denzel Washington) and RocknRolla (2008, directed by Guy Ritchie), but Elba didn’t score a leading man role until 2009’s Obsessed (with Beyoncé Knowles). Then he became a TV star in his own drama, Luther, a 2010 BBC crime series that was a hit in the United States as well. In addition to an acting career that straddles both sides of the Atlantic, Idris Elba has a recording career as Driis, including collaborations with top pop stars such as Jay-Z.  He also played South African great Nelson Mandela in Mandela: Long Walk to Freedom in 2013, the same year that Mandela died. Idris Elba’s other screen credits include the TV shows The Office and The Big C, and the feature films Takers (2010), Thor (2011, starring Chris Hemsworth) and Ridley Scott‘s Prometheus (2012).

Something in Common with Idris Elba