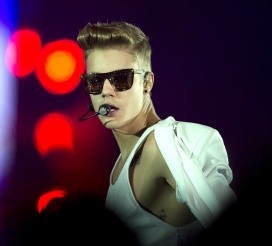 Justin Bieber started out as a youthful YouTube sensation, became a teen pop superstar, and has aged into a globe-bestriding blend of hit singer and 21st-century celebrity.

Justin Bieber’s career began with performances at a talent show in his hometown of Stratford, Ontario. He posted videos his mom had taken in 2007 (the year he turned 13) and over the next two years added to his archive while earning the love of Internet fans. A record producer from Atlanta, Georgia noticed his videos, and in October of 2008 Bieber signed with Island Records and began working on his first album.

My World was released in November of 2009, and by then Bieber already had four singles on the charts, thanks to well-orchestrated advance releases. He went on to be the smash teen heartthrob of 2010, famed for his fluffy curved-around-the-forehead hairstyle and his throngs of screaming teenaged fans.

Mentored by pop star Usher, Bieber released an updated version of the album (My World 2.0) in 2010 and toured the world again and again in the next few years, thrilling the fans known as “Beliebers.” He released a Christmas album, Under the Mistletoe, in 2011, and the multi-platinum album Believe in 2012.  His best-known songs include “One Less Lonely Girl,” “First Dance” (with Usher), “One Time,” and “Baby” (featuring rapper Ludacris).

As Bieber aged, he shifted his image from teen heartthrob to outlaw-wannabe, gathering a variety of tattoos and minor scrapes with the law in countries around the world. Most notably, he was arrested for driving under the influence and with an expired license in Miami Beach, Florida in 2014. (He eventually pled guilty to resisting an officer without violence, and to a lesser charge of driving without due care and attention; he paid a fine but served no prison time.) Such events didn’t seem to alter his popularity, and his 2015 album Purpose peaked at #1 in the US, Canada and Denmark.

Justin Bieber married model Hailey Baldwin in 2018; she is the daughter of actor Stephen Baldwin and the niece of actor Alec Baldwin. Bieber confirmed their marriage in a tweet on November 23, 2018, saying he had just spent his “first Thanksgiving as a married man.”

Something in Common with Justin Bieber