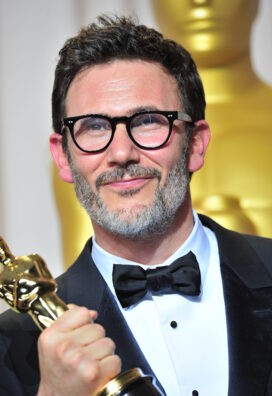 Michel Hazanavicius is the French director who won an Oscar in 2012 for The Artist, his charming silent movie set in the early days of Hollywood.  Michel Hazanavicius was born in France and got his start there directing TV commercials and then various TV projects. His first theatrical feature, Mes amis (“My Friends”), was released in 1999. His next feature was the James Bond-style spy spoof OSS 117: Cairo, Nest of Spies (2006), which starred Jean Dujardin and Berenice Bejo. A big hit in France, the film spawned the 2009 sequel OSS 117: Lost in Rio. Michel Hazanavicius won international huzzahs for The Artist, his unusual 2011 feature film. Shot in black and white and with almost no dialogue, it tells the story of a 1920s film star (Dujardin) who loses his way as silent films give way to talkies. Hazanavicius won an Oscar as best director and the film won an Oscar for best picture.

Michel Hazanavicius is married to Berenice Bejo, who starred in both The Artist and OSS 117: Cairo, Nest of Spies… According to IMDB.com, Hazanavicius and Bejo have two children: Lucien (born 2008) and Gloria (born 2011)… His older brother, Serge Hazanavicius (b. 1963), is a film actor; he appeared in Michel’s films Mes amis and OSS 117: Lost in Rio… Peter Travers said The Artist “encapsulates everything we go to movies for” and Roger Ebert called it “one of the most entertaining films in many a moon”… Hazanavicius is a big fan of director Billy Wilder. “He’s a god to me,” he told Collider.com in 2011.

Something in Common with Michel Hazanavicius