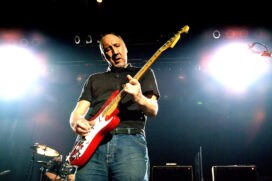 Pete Townshend is 77 years old
Born: May 19, 1945
Birthplace: London, England
Best known as: Guitarist and songwriter for The Who
Buy from Amazon.com: Music by Pete Townshend

Pete Townshend is the guitarist and driving force behind The Who, one of the most successful of the 1960s’ British rock groups. Pete Townshend grew up in a London suburb and began playing music as a teenager. By 1964 he was a member of The Who, joining bass player John Entwistle (1944-2002), vocalist Roger Daltry (b. 1944) and drummer Keith Moon (1946-78). By the end of 1965 the group was a sensation in the United Kingdom, famous for their violent stage acts (Townshend smashed guitars during performances) and for the hit songs “I Can’t Explain,” “Anyway, Anyhow, Anywhere” and “My Generation” (the latter includes the Townshend-penned line, “I hope I die before I get old”). The main songwriter for the group, Pete Townshend is now recognized as one of the more skilled composers in rock, with a portfolio that includes The Who songs “Magic Bus,” “Pinball Wizard” and “Won’t Get Fooled Again,” and solo work that includes the albums Rough Mix (1977, with Ronnie Lane) and Empty Glass (1980). In the 1980s he released solo records and became more involved in literary pursuits; he worked as an editor for book publisher Faber and Faber and in 1985 published Horse’s Neck, a collection of stories. In recent years he has reportedly been working on a new project for The Who (whose only surviving member is Roger Daltry).

Pete Townshend has been a follower of the Indian spiritual teacher Meher Baba (1894-1969) since 1968… He won a Tony Award in 1993 for a stage production of Tommy… Pete Townshend is an outspoken advocate of hearing protection, claiming a loss of hearing from years of loud rock and roll… In 2003 he made headlines as the subject of a child pornography investigation. He was accused of visiting a pedophilia website, but Townshend explained that he was doing research for a book. In the end, investigators determined that he had not downloaded files from the site, but he was still ordered to register as a sex offender.

Something in Common with Pete Townshend