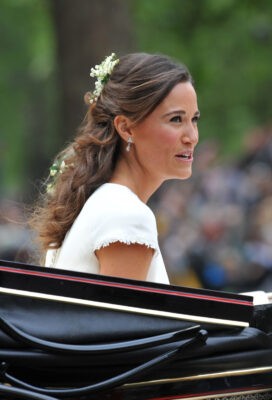 Philippa “Pippa” Middleton is the younger sister of Catherine, Duchess of Cambridge (that is, Kate Middleton).

The two sisters are close in age and similar in looks, a fact much commented on when Pippa served as Kate’s maid of honor at her marriage to Prince William in 2011. Pippa Middleton attended the University of Edinburgh (her sister went to the University of St. Andrews) and graduated in 2007 with a Literature degree. She took a job in London with event organizing company Table Talk and became a popular figure on the London social scene; Tatler magazine named her Britain’s most eligible ‘society singleton’ of 2008.

In 2010 she founded The Party Times, an online party-planning magazine that was associated with her parents’ party supply company, Party Pieces. At the Royal Wedding in 2011, Pippa Middleton caught the eye of a worldwide TV audience while holding her sister’s train before and during the ceremony. Pippa’s head-turning curves, as showcased by her own simple Alexander McQueen gown, became one of the most-discussed sidelight topics of the day.

Becoming a celebrity in her own right, Pippa Middleton in 2012 published the book Celebrate, described as “a one-stop guide to entertaining throughout the British year.”

Pippa Middleton married James Matthews on May 20, 2017, in what USA Today called a “lavish and semi-royal” ceremony. James Matthews (born in 1975) is a financier and former race car driver. Their first child, a boy named Arthur, was born on October 15, 2018.

Pippa Middleton “hates being called Pippa and has apparently asked that her full name, Philippa, be used at court,” according to a 2011 report by Tom Sykes in The Daily Beast. However, ABC News reported on the day of the Royal Wedding that “family members call her Pip”… Pippa Middleton also has a brother, James Middleton, who was born in 1987. Kate Middleton was born in January of 1982, 20 months before Pippa… Pippa’s middle name is also the first name of Kate Middleton’s daughter, Princess Charlotte.

Something in Common with Pippa Middleton