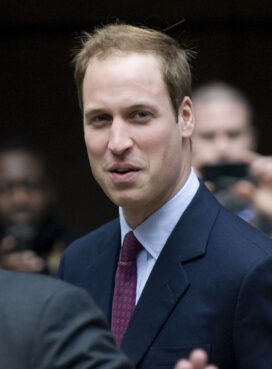 Prince William is next in line to the British throne now held by his father, King Charles III.

Prince William is the first son of Charles and the late Princess Diana.

Prince William attended Wetherby and Ludgrove schools, followed by Eton College and then the University of St. Andrews in Scotland. His good looks, athletic manner and royal status made him a popular public heartthrob during his teen years. On June 22, 2005 he graduated from St. Andrews, receiving an upper-second class honors degree with a focus in geography.

He entered Sandhurst Military Academy in January of 2006 and graduated in December of that year; in January of 2007 he reported for duty in the Blues and Royals regiment of the Household Cavalry, and has continued military service since then.

His younger brother, Prince Harry, graduated from Sandhurst and joined the Household Cavalry before him.

Prince William began dating Kate Middleton, a fellow student from St. Andrews, in 2003. They broke up briefly in 2007, but reunited the same year.

On November 16, 2010, Buckingham Palace announced that the couple were engaged to be married. The Royal Wedding was held on April 29, 2011, a Friday, at Westminster Abbey in London. Queen Elizabeth announced before the wedding that she had bestowed the title of Duke of Cambridge on William, and had also given William and Kate the Scottish titles of Earl and Countess of Strathearn — possibly a nod to their meeting at St. Andrews.

Their first child, a son named George Alexander Louis, was born on July 22, 2013 and immediately became third in line to the throne behind his father and his grandfather, Prince Charles. Their second child, a daughter named Charlotte Elizabeth Diana, was born on May 2, 2015. A third child, Louis Arthur Charles, was born on April 23, 2018.

Prince Harry, born in 1984, is Prince William’s only sibling… Prince William visited Chile for 10 weeks of volunteer work in 2000 with the group Raleigh International… He was played by actor Jordan Freida in the 2002 TV movie Prince William on the American network ABC… William’s childhood nickname is “Wills”… According to a 2005 report from the Reuters news service, Prince William’s upper-second class honors degree from St. Andrew’s is “the second highest undergraduate award in Britain and the best academic grade any member of the UK royal family has managed.”

Something in Common with Prince William