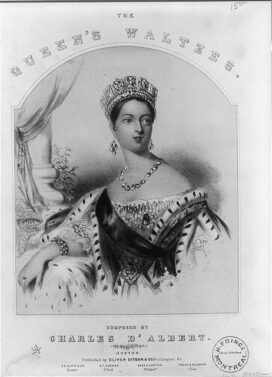 Queen Victoria reigned over the British Empire for nearly 64 years, from 1837-1901. She presided over a period of industrial progress, artistic successes and political empire-building which became known as the Victorian Era.

Victoria was only 18 when she became queen upon the death of her uncle, King William IV. In 1840 she married her first cousin Albert, the German son of the Duke of Saxe-Coburg and Gotha. Victoria was shattered by his untimely death at age 42, and she went into a prolonged period of mourning. (She never stopped mourning entirely, wearing black the rest of her life.)

Late in the 1860s, Queen Victoria re-emerged into public life, and as years passed she became increasingly venerated among her subjects. Victoria celebrated her diamond jubilee — 60 years on the throne — in 1897. After her death in 1901 she was succeeded by her son Prince Albert, who became King Edward VII.

Queen Victoria’s reign of 63 years and 216 days stood as the longest in British history for more than a century, but was surpassed in 2015 by that of her great-great-granddaughter, Queen Elizabeth II.

Something in Common with Queen Victoria