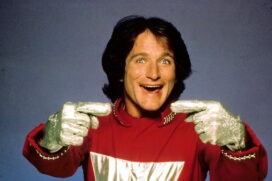 Comedian and actor Robin Williams was a manic prankster and lovable loose cannon on TV and in film from his 1970s breakthrough until his untimely death in 2014. Robin Williams first became a star on the TV series Mork and Mindy (1978-82), playing Mork from Ork, a sweetly nutty space alien learning about life on Earth. Williams moved quickly into films, often playing wise comic oddballs in heartfelt dramas. He was Oscar-nominated for Good Morning, Vietnam (1987), Dead Poets Society (1989) and The Fisher King (1991) before finally winning an Academy Award as the sympathetic psychologist who befriends Matt Damon in Good Will Hunting (1997). In a more comic vein he played a wacky genie in the Disney animated feature Aladdin, the strong-armed title sailor in 1980’s Popeye (with Shelley Duvall as Olive Oyl), a cross-dressing dad in Mrs. Doubtfire (1993, with Sally Field), a grown-up Peter Pan in the 1991 Steven Spielberg movie Hook, and President Teddy Roosevelt in the comedy adventure Night at the Museum (2006). His other films include Insomnia (2002, with Al Pacino), One Hour Photo (2002), Robots (2005, voice) and David Duchovny‘s House of D (2004). He also starred on the TV series The Crazy Ones in 2013-14, and in 2011 he starred on Broadway in Bengal Tiger at the Baghdad Zoo. He was found dead at his home in Tiburon, California on 11 August 2014. A statement from the Marin County Coroner the same day said the death was suspected to be “suicide due to asphyxia.” The next day a deputy coroner clarified that Williams had hung himself, and had been found in his bedroom by his personal assistant, “unresponsive with a belt secured around his neck, with the other end of the belt wedged between the clothes closet door and the door frame.”

Robin Williams was married three times: to Valerie Velardi (from 1978 until their divorce in 1988; to Marsha Garces (from 1989 until their divorce in 2008; and to Susan Schneider (from 2011 until his death in 2014). With Velardi he had a son, Zachary (b. 1983). With Garces he had a daughter, Zelda Rae (b. 1989) and a son, Cody (b. 1991). Williams met Garces when she became a nanny to Zachary… Robin Williams also maintained a stand-up comedy career, and joined Billy Crystal and Whoopi Goldberg as co-host for many Comic Relief benefit shows… Robin Williams was unrelated to folk music stars Robin and Linda Williams… The character of Mork from Ork originated as a guest star on the Ron Howard TV series Happy Days… Some sources list his birth year as 1952 rather than 1951. (The 1998 biography Robin Williams by Andy Dougan, for one, says that Williams was born in 1952.) However, the coroner’s statement after his death said that Williams was age 63 at his death in 2014, indicating a 1951 birth.

Something in Common with Robin Williams