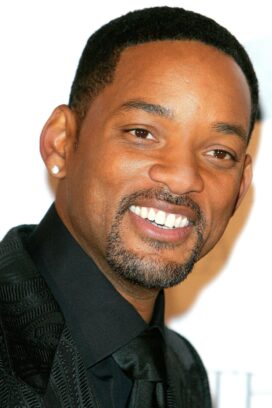 See photos of Will Smith

Facts about Will Smith

Will Smith was a TV star and pop rapper who became a leading man in dramatic film roles, but who became more famous for losing his cool at the Oscar awards in 2022 just before winning for best actor (his first win after three nominations).

Smith was the “Fresh Prince” part of the 1980s musical pop duo D.J. Jazzy Jeff and the Fresh Prince, and by 1990 his charisma and infectious enthusiasm had landed him the lead in a TV sitcom, The Fresh Prince of Bel Air.

His television success led to film roles, and in the late 1990s he won big at the box office with Bad Boys (1995, with Martin Lawrence), Independence Day (1996, with Jeff Goldblum) and Men in Black (1997, with Tommy Lee Jones).

Will Smith also continued his music career, releasing the albums Big Willie Style (1997) and Willennium (1999). But eventually, music took a back seat to his A-list Hollywood movie career. Smith is primarily known for his action/comic roles, but he’s proven himself in dramas — nominated for Oscars as boxer Muhammad Ali in 2001’s Ali, and as a down-on-his-luck dad in The Pursuit of Happyness (2006).

He earned his third acting Oscar nomination and his first win for the 2021 film King Richard, paying Richard Williams, the hard-driving father of tennis stars Serena and Venus Williams. Prior to winning the award, Smith responded to a joke about his wife with violence and obscenities on live television, but the Oscar telecast plowed ahead, making headlines and history.

The Oscar success of King Richard was overshadowed by Will Smith’s violent outburst on live television during the awards ceremony. Presenter Chris Rock saw Smith and Smith’s wife, Jada Pinkett Smith, near the stage and joked about looking forward to seeing “G.I. Jane II,” a mocking reference to Pinkett Smith’s shaved head (shave because of a medical condition). After first laughing at the joke, Smith walked up to the stage and hit Rock in the mouth, then returned to his seat and shouted obscenities while the cameras rolled. Rock maintained his composure and carried on as the audience reacted with confusion. Less than an hour later, Smith gave a rambling, emotional acceptance speech as best actor while the crowd sat silent for the duration… Smith was married to Sheree Zampino from 1992 until their divorce in 1995. They have one son, Willard Smith III (called “Trey”), born in 1992. Will Smith then married actress Jada Pinkett on New Year’s Eve in 1997; they have two children, son Jaden (born 1998) and daughter Willow (born 2000).

Something in Common with Will Smith