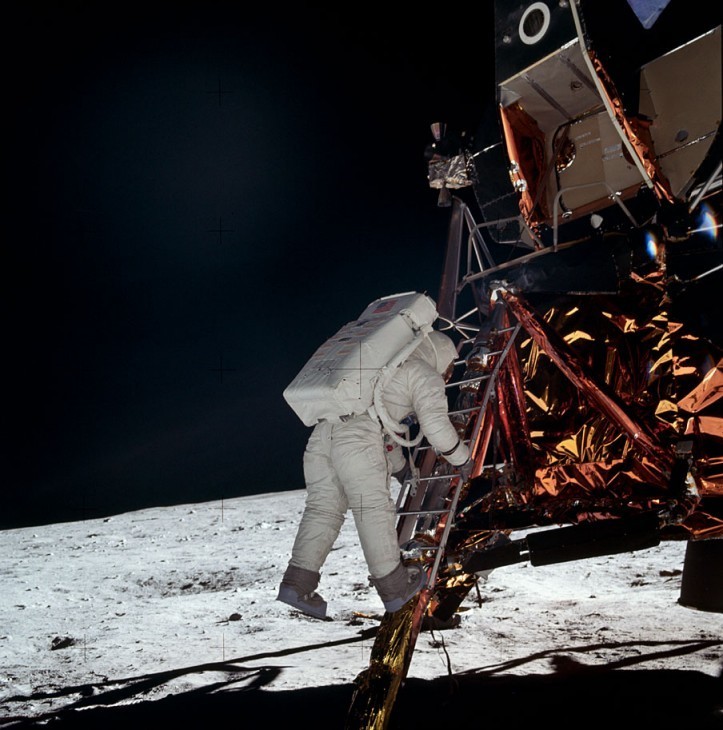 109:24:23 Armstrong: That’s one small step for (a) man; one giant leap for mankind. (Long Pause)
[At the time of the mission, the world heard Neil say “That’s one small step for man; one giant leap for mankind”. As Andrew Chaikin details in A Man on the Moon, after the mission, Neil said that he had intended to say ‘one small step for a man’ and believed that he had done so. However, he also agreed that the ‘a’ didn’t seem to be audible in the recordings. The important point is that the world had no problem understanding his meaning. However, over the decades, people interested in details of the mission – including your editor – have listened repeatedly to the recordings, without hearing any convincing evidence of the ‘a’. In 2006, with a great deal of attendant media attention, journalist / entrepreneur Peter Shann Ford claimed to have located the ‘a’ in the waveform of Neil’s transmission. Subsequently, more rigorous analyses of the transmission were undertaken by people with professional experience with audio waveforms and, most importantly, audio spectrograms. None of these analyses support Ford’s conclusion. The transcription used above honors Neil’s intent.]

From Jones’s amazing Apollo 11 Lunar Surface Journal. He (and others) annotated the audio from the entire mission.
Personally, I always liked it as “One small step for man” anyway. Better rhythm.
See our biography of Neil Armstrong »
( Photo: Buzz Aldrin steps onto the moon on July 20, 1969. NASA photo by Neil Armstrong, who had stepped down minutes earlier. )