The frontier lawman was born 19 March 1848. Coincidentally, I recently watched a 1957 movie about him.

Don’t ask me why, but three nights ago I watched The Gunfight at the O.K. Corral, the 1957 movie with Burt Lancaster as Wyatt Earp.

Kirk Douglas plays Doc Holliday. And boy is he mean! When he’s not coughing or making googly-eyes at Wyatt Earp, he’s tossing his girlfriend around the room and pulling her hair. Oh, sure, he pulls his pistol out plenty of times, but only when there are men around. If you get my drift.

The movie is basically a love story between Wyatt Earp and Doc Holliday, and they don’t even get to Tombstone — where the gunfight takes place — until about 80 minutes into the 130-minute movie.

In this version of the story, the Clantons are definitely the bad guys, and Wyatt Earp is definitely the good guy. He even tries to save young Billy Clanton (Dennis Hopper!) from his shootin’ ways by giving him a good talking to, right there in front of Billy’s ma: 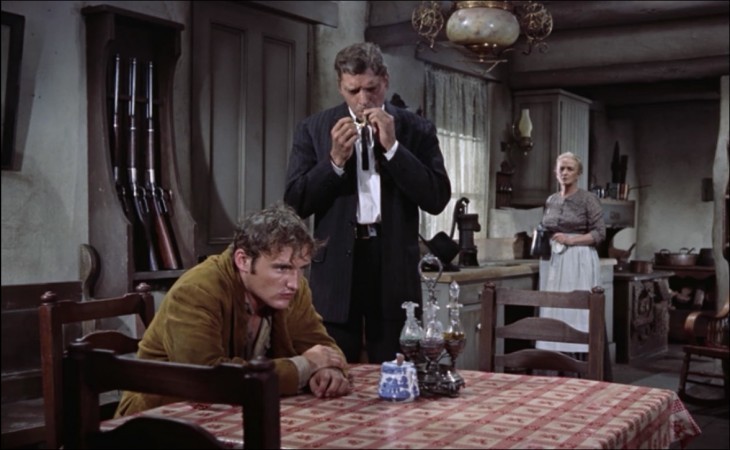 In the real story of the gunfight at the O.K. Corral, there really aren’t any good guys, exactly. From what I’ve read, it’s really just a story about some territorial urinating contest.

Earp lived to be 80 and died in 1929. By that time, the Old West wasn’t the Old West anymore, except in Hollywood. At the time of his death, Wyatt Earp wasn’t as famous as he is now. His legend got kick-started a couple of years after his death, and then the movies took it from there.

Read a good article about that very thing here.