Marilyn Monroe was an up-and-coming movie star when she married baseball hero Joe DiMaggio on 14 January, sixty years ago. It didn’t work out.

They divorced nine months later, with Marilyn claiming “mental cruelty” on Joe‘s part. The story goes that he wasn’t so cool with Marilyn sharing her sex appeal with the world. Oops!

They had their first date in March of 1952. One thing to remember was that DiMaggio was the bigger celebrity. Joltin’ Joe played for the New York Yankees for 13 seasons — and nine World Series championships. When he met Monroe he was 36 years old and had just retired because of injuries.

Marilyn Monroe was a movie star with the publicity machine of Fox studios behind her, but she’d only made her first movie a few years before. Nearly two years later, when the couple finally wed in 1954, Marilyn’s star was shining as brightly as Joe’s.

Parade has a slideshow of photos from their 1954 wedding.

They say Joe DiMaggio lost his temper when Marilyn was filming The Seven Year Itch. The iconic image from that movie, with Marilyn’s skirt flying up from the subway breeze, was the last straw, according to legend, and nine months into their marriage, Marilyn called it quits. 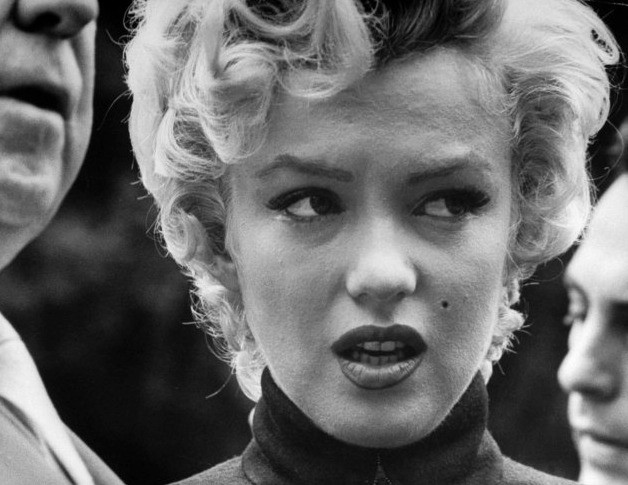 LIFE magazine has a slideshow of photos from her announcement.

I’ve never been much of a Marilyn Monroe fan, and I can even get a little bit cranky at Pop Culture’s insistence on cramming Marilyn images down our collective throats for all the long decades since her death. Not the levels of cranky reached by Joe DiMaggio, whose image as national hero is now somewhat stained by our knowledge that he was a jerk and a skinflint.

But I’m able to see the fascination with a tale of super-celebrity going mad and ending in sorrow. Especially since she’s so curiously tied to so many other American icons: Joe Dimaggio and New York intellectual Arthur Miller, President John F. Kennedy, Attorney General Robert F. Kennedy, Frank Sinatra… not to mention all of her movie co-stars over the years.

And at least the Marilyn and DiMaggio story has a poignancy that keeps it from being too soaked in tragedy. They say the two remained friends in some odd way, and that it was Joe who got her out of the psych ward when she was spinning out of control on drugs and alcohol. They also say Joe’s final words were about Marilyn, with the suggestion that she was the only woman he ever loved.

So here’s to the 60th wedding anniversary of Joe DiMaggio and Marilyn Monroe.