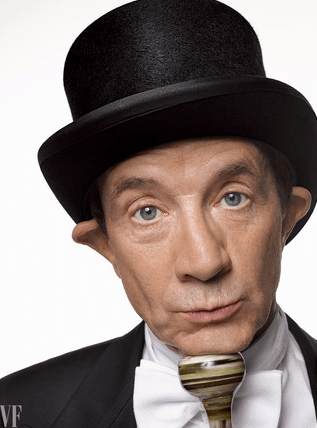 “In February of 1972, I made a little contract with myself. I was three months from graduating from McMaster University, in my hometown of Hamilton, Ontario. Originally, I’d been a pre-med student, but by junior year I’d switched to majoring in social work, in large part because it freed me up to be in plays with two friends I’d made at McMaster: Dave Thomas, who was my year, and Eugene Levy, who was a little older.

…I would give myself one year after graduation to try to get work as an actor. If, by May of ’73, things were going reasonably well, I would renew my showbiz contract for another year; if they weren’t, I would go to the registrar’s office at McMaster and beg them to hold a place for me in grad school that fall.”

Good stuff: Martin Short tells Vanity Fair how he started his career as actor, song-and-dance man and off-kilter comedian. First he landed a TV commercial as a talking credit card; then he was chosen personally by Stephen Schwartz for the original Toronto cast of Godspell. Needless to say, he never made it back to McMaster.
Also included: memories of dating Gilda Radner and the story of how Eugene Levy was almost too hairy to play Jesus. (We’ve marveled at that story before.)
Amazing how much comedy talent came out of one town in those days.
Comedy Legend Martin Short Recalls His Start in Showbiz »