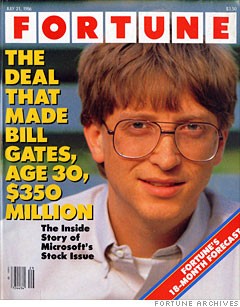 Well, it seemed like a big deal at the time.

“Gates, a gawky, washed-out blond, confesses to being a ‘wonk,’ a bookish nerd, who focuses singlemindedly on the computer business though he masters all sorts of knowledge with astounding facility. Oddly, Gates is something of a ladies’ man and a fiendishly fast driver who has racked up speeding tickets even in the sluggish Mercedes diesel he bought to restrain himself.”

Bill Gates is worth $56 billion now, of course, according to Forbes.  He’d be worth $86 billion or more if he hadn’t given away $30 billion to charity in the last few years.

$30 billion to charity. That is truly wonderful.

As it is, the charity giving has moved him down to #2 on the worldwide billionaires list for 2011, behind Mexican telecom magnate Carlos Slim Helu.

Here is a Dog in a Saint Patrick’s Day Outfit
Ginger Wants You All to Have a Great St. Pawdy’s Day