No, that’s not the sequel to The King’s Speech.

We wrote recently about the late King Hussein of Jordan and his love for ham radio.  That prompted a terrific comment from Bren McCartney (G4DYO) of the UK, referring to the king by his radio call sign of JY1:

I worked JY1 twice on HF; on each occasion it was a “real” QSO rather
than a rubber stamp job. He was very unassuming, spelling his name and
QTH for me. I told him I lived near Sandhurst (Military Academy which
he had attended) and this provoked a couple more overs, ending with him
inviting my XYL and I to visit him should we ever be in Jordan! This
wasn’t idle talk either – I know of a few hams who did just that and
received a Royal welcome.

Way back, he used to appear often on
20m and an English ham used to help him with the pile-ups. One day the
King said he would be in London soon and wanted to visit the G3, who
lived in a modest house in northern England. True to his word, the King
showed up!

One day a YL op in the Faeroe Islands joined the list
but when JY1 called her the response was from an OM OY op. The King
said he wanted to speak to the YL but the OM explained that it was his
mother who had been called away. “Give me your phone number and next
time I am on I will call her to make a contact”. He duly did just that.

A true gentleman and a great ham operator.

Great stuff.  (XYL, in ham radio lingo, is the operator’s wife.  OM and YL are ham-speak for “old man” and “young lady,” the gender desciptors no matter the operator’s age.  And QSO is the term for radio contact between two operators.)

Mr. McCartney forwarded us the QSL card he received from King Hussein to confirm their talk: 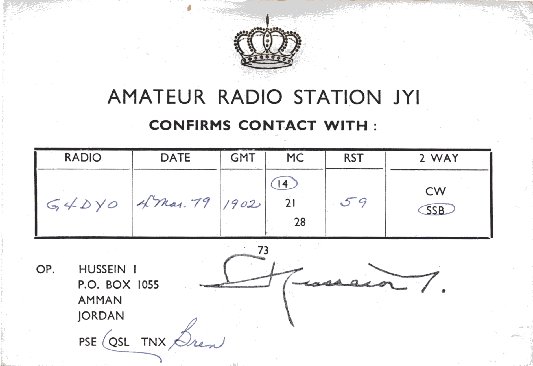 There can’t be that many ham operators with a royal logo atop their QSL cards — or that many kings who’d take the time to write them by hand. A pretty cool royal family: the father on ham radio, and the son on Star Trek.

Thanks for the great stories, Mr. McCartney.