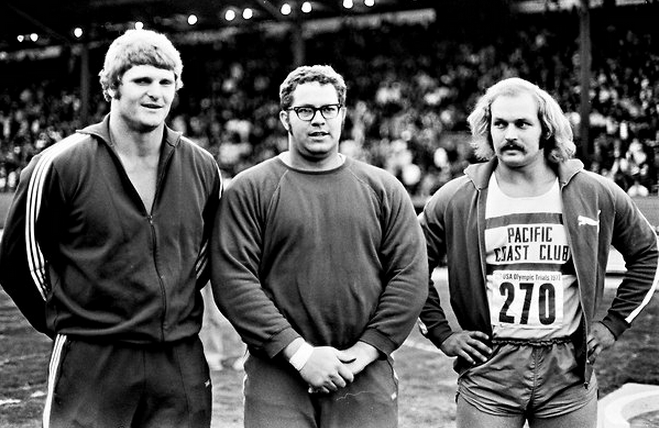 The New York Times is currently featuring a wonderful slideshow of athletes from the 1972 Olympic Trials in Eugene, Oregon. Above we see shotputters Brian Oldfield, George Woods, and Al Feuerbach. This was back in the days when track and field athletes had nerdy glasses, wore sweatshirts without ad logos or ornamentation, and didn’t necessarily eat egg whites and skinless chicken breast for dinner every night.

And it worked! George Woods won the shot put silver medal at Munich that year; Oldfield and Feuerbach finished 5th and 6th. 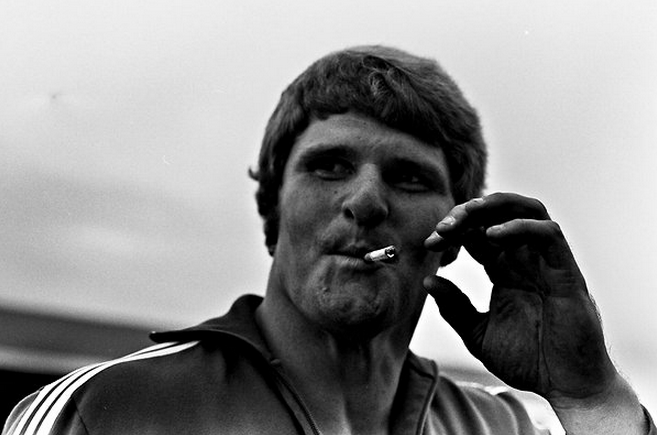 That’s Brian Oldfield again, enjoying a pregame cigarette. Oldfield invented the discus-like whirl for shotputters now known as the Oldfield spin. He was a robust 27 at the time, and he’s still alive and coaching. (His website says he once dunked a 16-pound shot put sphere.) And finally, in a moment that now seems like a million years ago: Caitlin Jenner, then known as Bruce Jenner, finishing first in the 1500 meters to squeak into third place in the decathlon, earning a spot on the Olympic team. Jenner didn’t medal that year, but won gold in the decathlon in 1976 Olympics in Montreal.

(Side note: Love how they’ve got a random gawky kid out there to hold a piece of string for the finish line!) 1972 was also Steve Prefontaine‘s big year, god bless him. Here he is winning the 5000 meters in an OREGON singlet. (He just missed a medal in Munich, finishing fourth.) A true Oregon great, he was.

For more photos, see: The 1972 Olympic Trials in Black and White »