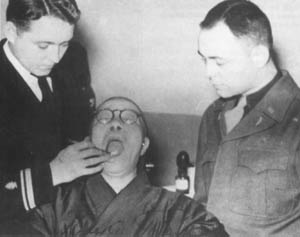 We noted earlier that Japanese prime minister Hideki Tojo was saved from suicide by U.S. forces, who later executed him.

Between those two events, a U.S. Navy dentist, Dr. Jack Mallory, was called in to make dentures for the famous prisoner.

Once word got out that the young naval officer was in charge of the task, hospital staffers began urging him to pull a prank on the general.
The military procedure for dental appliances was to engrave the name, rank, and serial number of the individual on the dentures themselves, Mallory explains. His colleagues pressured him instead to put the phrase “Remember Pearl Harbor” on the dentures.
After thinking it over, Mallory decided to go through with the prank, but to do it in a way that was less obvious and thereby safer—by using Morse code to write the message. He carefully drilled the dots and dashes into the dentures, engraving them with an unforgettable slogan forever ingrained in the American people’s minds.

Prank does seem like too jovial a word for the actual situation. (Maybe “revenge drilling”?) Word leaked out to the press eventually, but Tojo himself never found out:

In the final week of Mallory’s stay in Japan he attended the war crime trials and watched Tojo as he sat, just 30 feet away, in the center of a lineup of defeated Japanese generals. As Tojo’s eyes wandered around the courtroom, Mallory noted the moment they fell on him sitting in the reporters’ box…
Tojo’s wrinkled face broke into a smile as he pointed to his teeth and bowed toward him in thanks.

The Message on Tojo’s Teeth »