First, who the heck was she?

Eliza McCardle Johnson was First Lady of the United States just after the Civil War ended. She was the wife of President Andrew Johnson, the guy who became president after Abraham Lincoln was killed.

Those were some grim times at the White House. Eliza McCardle Johnson didn’t brighten things up as First Lady, either. Perpetually sick, she made just two public appearances between April of 1865 and the time her husband left office in March of 1869.

Eliza wasn’t the most dazzling First Lady in history, and perhaps that’s why little is known about her early life.

It’s not quite clear, for example, where precisely Eliza McCardle was born in northeastern Tennessee. While Greeneville certainly qualifies as her hometown — it’s where she lived most of her life — several sources list nearby Leesburg as her birthplace.

Other sources aren’t more specific than saying her family moved to Greeneville when Eliza was very young.

In 1810, Leesburg was one of the few small villages in Washington County, Tennessee. There are no court or hospital records. According to Goodspeed’s History of Washington County, as of 1897 Leesburg “never attained much importance, and has now well nigh disappeared.”

Greeneville is in adjacent Greene County, and in the same boat, records-wise. There’s little hope of tracking down an official document that proves where Eliza was born.

Who2 called the Andrew Johnson National Historic Site in Greeneville to see if they could answer the question: Where was Eliza McCardle Johnson born?

They’re all very nice at that place, and the first two fellows wouldn’t hazard a guess as to Eliza’s birthplace. They connected me with Kendra Hinkle in the museum, who said it would be pretty tough to know for sure.

Hinkle told me the McCardle family bible says Eliza was born in Greeneville. But! She also said there is a historical marker in Leesburg that reads “The birthplace of Eliza McCardle wife of President Andrew Johnson.” Hinkle was even nice enough to drive up to Leesburg and take some photos of the marker: 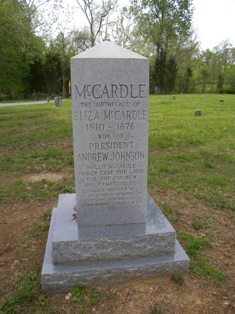 The marker was presented by the McCarty United Methodist Church, the Leesburg Ruritan Club and the Sarah Hawkins Chapter of the Daughters of the American Revolution, and it’s dated 1976.

It’s a pretty nice marker. But there are all kinds of reasons why local clubs might want to seize on a story that says they’re squatting on land that spawned a First Lady. Should we trust the community’s regional loyalty or the McCardle family bible?

It’s hard to say. The story that Eliza was born somewhere else just before her family moved to Greeneville has staying power. Her parents were married in 1809, the year before her birth, on McCardle property in Leesburg. Greeneville is only about 20 miles from Leesburg. It’s easy enough to imagine a young couple staying on the family farm, and it’s easy enough to imagine a (pregnant) young couple moving up the road a piece.

Meaning, I can’t reason my way to a conclusion about Eliza McCardle’s birthplace.

For our profile I went with Greeneville, with the hope that more information may come to light.

I chose Greeneville because the record in the family bible carries some weight, but also because someday a stranger may ask me, “where was Eliza McCardle Johnson from, anyway?” The obvious answer is “Greeneville, Mr. Buttinsky.” I wouldn’t want to go into all the details with a stranger, after all.