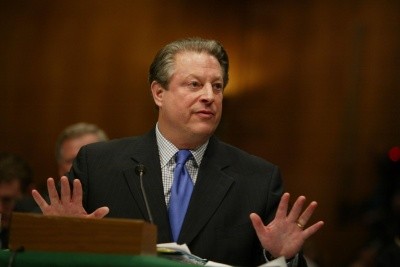 In 1991, the US Congress had passed the High Performance Computing and Communication Act, better known as the “Gore Bill,” named after its original sponsor, then-senator Al Gore… Among the bill’s provisions was a piece of policy best known by its popular name: the “information superhighway.” But rather than putting shovels in the ground to build it, government policymakers catalyzed private companies to do it for them, by funding the construction of “on-ramps.”

Gizmodo has a nice story recapping Al Gore‘s contributions to the Internet, including the above quote from Andrew Blum.

Karl Rove‘s famous strategy of attacking an opponent’s strength — which is to say, lying about it — has never worked its evil magic better than it did against Al Gore in 2000. By claiming that Gore said he “invented the Internet” and then snickering loudly about it, he convinced people that Gore was a naive braggart.

In fact, Gore was a visionary who was talking about the information superhighway in the 1980s, back when hardly anyone in politics had even heard of email. He never said he invented the Internet anyway. What he said was, “During my service in the United States Congress I took the initiative in creating the Internet.” A bit of an overreach on its own, perhaps, but if you replace “Internet” with “the public structures that made the modern Internet possible,” it’s 100% true.

Gore may or may not have made a great president, but he sure thought a lot further ahead about things than Rove’s boss George W. Bush ever did. Gore also turned out to be 100% right about global warming… Not that that foresight has been accepted, either. It’s a bummer.

But nice to see Gizmodo continue to set the record straight.

Did Al Gore Invent the Internet? »