See a photos from behind the scenes of the new James Bond movie Skyfall, and learn about stunt driver Ben Collins.

The Los Angeles Times has an interview with Collins and a slideshow here. The piece is about driving the special cars for chase scenes in Skyfall, released this week with Daniel Craig once again playing James Bond. 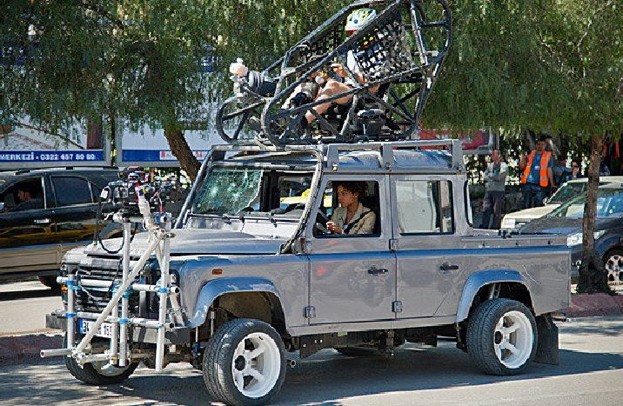 That’s driver Ben Collins in the cage welded to the top of a Land Rover. They used the contraption instead of a trailer rig because they were shooting in narrow streets in Turkey. Collins says at times the Rover got up to 70 mph.

Ben Collins also drove for the chase scene in the 2008 Bond film Quantum of Solace. He said it took three months to film that sequence, and that originally it was a 20-minute chase. In the final film version, the chase scene is edited down to just three minutes.

Collins is also a race car driver, and fans of the BBC series Top Gear might know him as the white-suited “The Stig,” originally a masked, anonymous character. Collins revealed himself as The Stig after seven seasons, much to the chagrin of some of the show’s other members.

For more on Bond films, read the Who2 feature Common Bonds: Played Bond, with links to all our biographies of the actors who’ve portrayed him on the big screen.