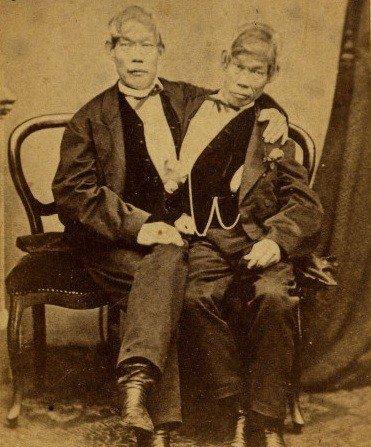 Chang and Eng Bunker were born on this day in 1811.

Chang and Eng were the original Siamese twins: they really were from Siam. While touring the world (at times with P.T. Barnum) they became known as THE Siamese Twins, a name which soon enough became the popular term for any conjoined twins.

You’ve probably seen the photos, but you may not know that in later life Chang and Eng Bunker settled in North Carolina as farmers, kept slaves (!), married teenaged sisters, and had 21 children between them.  They lived right outside Mt. Airy, which these days promotes itself as the inspiration for Andy Griffith‘s idyllic TV town of Mayberry. (This is why Goober and Gomer Pyle were conjoined twins in early episodes of the show.)

Not that life was all honeysuckle and tobacco for the Bunkers:

Heated arguments became more common and for only the second or third time in their lives, the two had come to blows. Although the exact cause of this violent dispute is not known, part of the problem was Eng’s fondness for all-night poker games and Chang’s fondness for the bottle.

So the wives lived apart, and Chang-Eng followed a strict regimen of three days at one house and three at the other, with the “guest” brother submitting to his “host” brother’s every whim.

So notes this excellent recap of their vibrant lives and deaths.

Two of their sons were among the rare Asians who fought for the Confederacy in the Civil War.  Like many other Southerners, the Bunkers were ruined by the Civil War, and they went back on the road to rebuild their fortunes.  Chang died first, in 1874, and Eng died hours later — though whether from biological factors or sheer shock is unknown.

See our biography of Chang and Eng Bunker >>