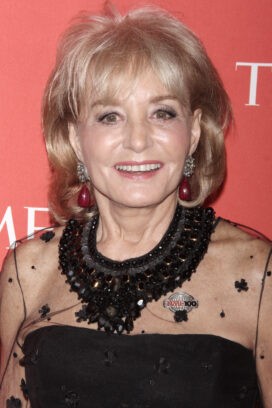 Barbara Walters was the veteran broadcaster whose TV career extended from her prominent 1970s interviews with world leaders through her 21st-century successes with the morning show The View.

Barbara Walters began working in TV in the late 1950s. She spent fifteen years (1961-76) with NBC as a correspondent and then a co-host for The Today Show, then jumped to ABC News in 1976 to become the first woman to co-anchor a nightly news show. (Her on-air partner was veteran newsman Harry Reasoner.)

Although her stint as a news co-anchor was a flop, Walters became one of the most high-profile women in television broadcasting and a pioneer in a field dominated by men. She had a long run on ABC’s magazine show 20/20 (1979-2004), and hosted a popular series of Barbara Walters Specials, in which she interviewed personalities from politics and entertainment, including Menachem Begin and Anwar Sadat; Monica Lewinsky; Fidel Castro; Demi Moore; George Clooney; and the Dalai Lama.

Her annual post-Academy Awards interviews with movie stars (and her annual review of newsmakers, The 10 Most Fascinating People) established Walters’ late-era love-her-or-hate-her persona: a soft-focus interviewer whose subjects could be relied on to be offer a blend of safely “intimate” revelations and tears.  (The Washington Post called her “popular culture’s grande dame of the televised interview.”)

In 1997, Barbara Walters co-created and began starring on The View, a morning chat show whose all-female panel ranged from Debbie Matenopolous to Whoopi Goldberg to Jenny McCarthy. The show was a big hit and was still going strong in 2014 when Walters stepped down from the panel and retired from regular on-air work entirely.

During the early seasons of Saturday Night Live, comedian Gilda Radner parodied Barbara Walters in the form of a character named “Babwa Wawa,” a play on Walters’s name that mocked her distinctive style of speech.

Something in Common with Barbara Walters