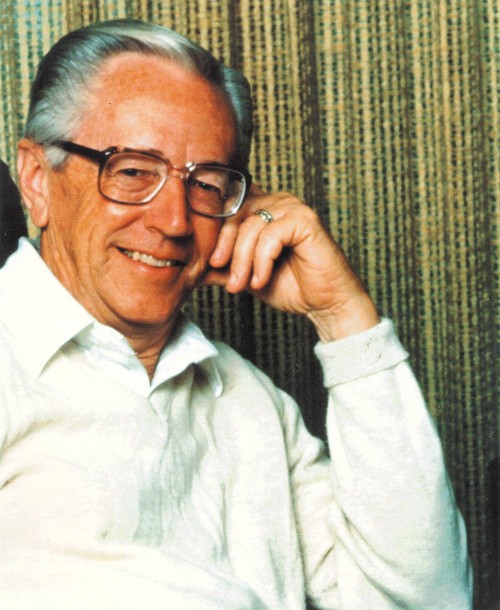 Cartoonist Charles Schulz, the creator of Charlie Brown and Snoopy and the rest of the kids in the comic strip Peanuts, was born 100 years ago today in Minneapolis, Minnesota. The date was November 26, 1922. World War I had ended four years earlier, and little did young Charlie Schulz know that he would grow up to a) fight in World War II, b) create one of the most beloved comic strips of all time, and c) end up with a museum dedicated to him in his adopted hometown of Santa Rosa, California.

To celebrate Schulz, today’s newspaper comic artists made this a day of tributes in their strips. Some of them slid a reference in sideways, and some dropped everything to offer a straight-up salute. Most did a little of both. Here’s a sampling.

Zits goes with a Great Pumpkin joke plus a Lucy-pulls-the-ball-away joke, both autumn classics. The leaning-on-a-brick-wall moment is another excellent Peanuts trope.

Gil Thorp is also on a football kick, but with a twist: good-guy coach Thorp not only lets Charlie Brown kick the ball, but offers him a spot on the varsity. Awww!

Mary Worth breaks the fourth wall with a straight-up salute to “the late Charles M. Schulz,” a respectfully formal phrase which is just so Mary. Looks like in Mary’s hometown of Santa Royale, the local (tabloid?) newspaper still runs the Sunday Peanuts strips. Bonus points for the excellent Snoopy sweater, which of course Mary would never wear in real life. 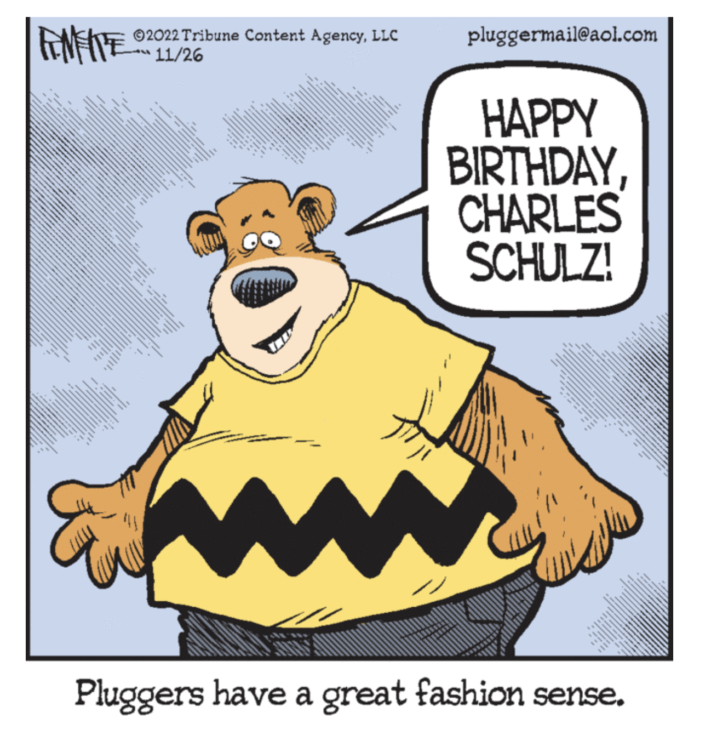 Pluggers, true to form, is direct and upbeat and terribly overweight. Everyone loves that Charlie Brown shirt, and with good reason. Charlie Brown’s wardrobe is as simple and recognizable as Queen Elizabeth’s.

Broomhilda and Rhymes With Orange are both worried about Snoopy’s back. I do love the contrast in artwork here: Broomhilda with a dead-perfect recreation of Schulz’s style, and Rhymes with its own loosey-goosey riff on Schulz. Love the bit with Snoopy’s snout through the massage table!

On the other end of the age spectrum, modern-day strip Daddy Daze offers a meta-take on the concept of comic strip characters who can hear each other think. If you’re not familiar with Daddy Daze, the entire strip consists of this exact daily interaction: the baby saying “ba ba” and the father figure interpreting aloud to himself the baby’s quips and deep philosophical thoughts. It’s weird. To be fair, the baby who is age two-going-on-forty-two is a fond comics trope. It’s possible that Schulz’s greatest trick was having his 7-year-old characters talk about love, life, and failure while still seeming a lot like real kids instead of like cloying, sassy smartmouths.

These are pleasant tributes from Crankshaft and Sally Forth, both very much in the spirit of each strip: Ted Forth takes his fanboy tendencies way too far, and Crankshaft ends, as always, with a self-satisfied smirk.

Let’s wrap up with with this warm tribute from the strip Curtis. I just love the idea of Charlie Brown showing up on Curtis’s street and greeting him like just another character who drops in now and then. (Something that happens in Curtis all the time, in fact.) It’s all so cosy that Charlie Brown saying “Just chillin’, homie!” doesn’t even seem humorously out of place. These two kids like to hang out! That’s how it is!

Ray Billingsley, the creator of Curtis, was a protegé of Charles Schulz and has even said that Schulz was “like a father figure to me.” One way to celebrate Charles Schulz’s birthday would be to read this lively 2021 interview with Billingsley, in which he touches on his relationship with Schulz, talks about being a Black cartoonist in the 21st century, and says he gave Schulz some gentle grief over Schulz’s late-arriving Black character, Franklin.

And for even more comics, the Charles Schulz Museum has the full collection of all 95 daily comic strips that did tributes to Schulz. Good stuff. Happy 100th, Mr. Schulz!