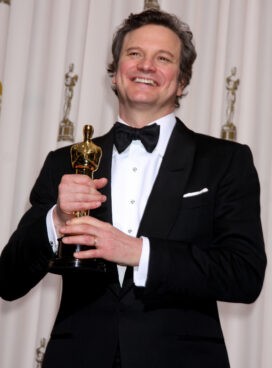 Colin Firth made female fans swoon as the darkly dashing Mr. Darcy in the 1995 BBC TV production of Pride and Prejudice. The film was a huge hit and launched Firth on a prosperous decade of movie roles: as a betrayed husband in The English Patient (1996, with Kristin Scott Thomas); as the villainous Lord Wessex in Shakespeare in Love (1998, with Gwyneth Paltrow); as the lawyerly love interest Mark Darcy opposite Renee Zellweger in Bridget Jones’s Diary (2001, and in the 2004 sequel); as struggling artist Jan Vermeer in Girl With a Pearl Earring (2003, with Scarlett Johansson); as the lovelorn novelist Jamie in Love, Actually (2003, with Hugh Grant and a cast of dozens); and as a father of seven in the puckish Nanny McPhee (2006, with Emma Thompson). Firth often plays glowering, passionate men whose reticence hides an essential goodness, but he has played a smattering of cads in films like Circle of Friends (1995). He also has appeared often on the London stage, training at the London Drama Centre and performing with the Royal Shakespeare Company and at the Old Vic. Colin Firth’s other films include The Accidental Husband (2008), A Single Man (2009, with Julianne Moore) and, as King George VI, The King’s Speech (2010).

Colin Firth was nominated for best actor Oscars for his performances in The King’s Speech and A Single Man, and won the award for The King’s Speech… Firth is 6’1″ tall, according to the celebrity site Tiscali… Pride and Prejudice was adapted from the 1813 book by Jane Austen… Firth played William Shakespeare in Blackadder Back & Forth, a short film made for London’s Millennium Dome in 1999… His character in Bridget Jones’s Diary, Mark Darcy, was named by author Helen Fielding as a nod to Pride and Prejudice… Firth married the former Livia Giuggioli in 1997. They have two sons, Luca (b. 2001) and Mateo (b. 2003). Firth also has a son, Will (b. 1990), by actress Meg Tilly.

Something in Common with Colin Firth