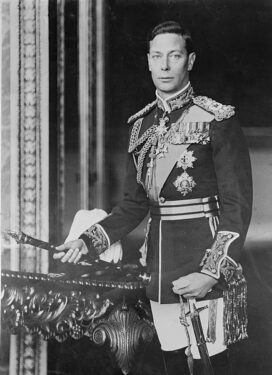 Called Albert as a young man, the future king George VI was the great-grandson of Queen Victoria and the second son of King George V.

During World War II the king and queen were praised for their staunch resolve and morale-boosting visits to factories and war-battered cities while the government of Winston Churchill prosecuted the war.

A heavy smoker, George VI was recovering from an operation for lung cancer when he died of a heart attack in 1952. His daughter became Queen Elizabeth II.

George VI was played by Colin Firth in the 2010 film The King’s Speech. The king did have a stuttering problem, just as depicted in the movie. The King’s Speech got 12 Academy Award nominations; it won as best picture of the year, and Firth won the Oscar as best actor for his performance… George VI died in the same building at Sandringham in which he was born… He was born with the family name of Saxe-Coburg-Gotha but died with the family name of Windsor; as explained by the Royal Family’s official site, “The name Saxe-Coburg-Gotha came to the British Royal Family in 1840 with the marriage of Queen Victoria to Prince Albert, son of Ernst, Duke of Saxe-Coburg & Gotha… King George V replaced the German-sounding title with that of Windsor during the First World War.”

Something in Common with George VI