I recently passed by a bus stop advertisement from Values.com that gave me pause: 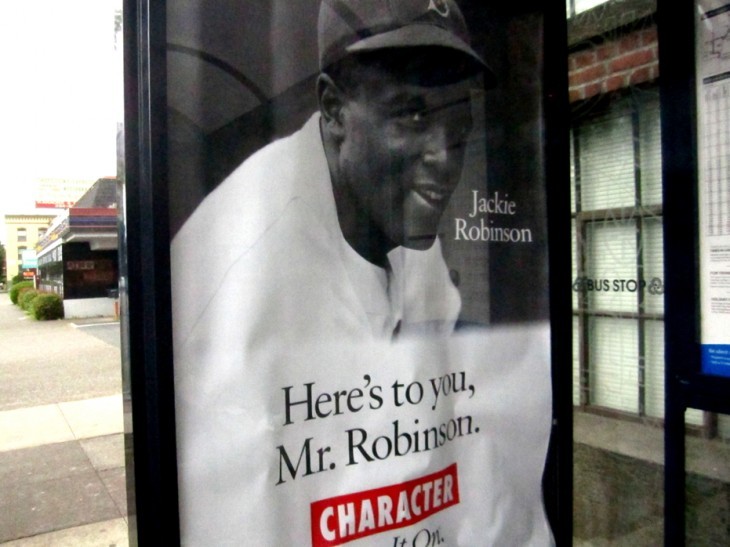 That’s baseball legend Jackie Robinson, the Brooklyn Dodger who was the first African American to play in the majors in the modern era.

The phrase “Here’s to you, Mr. Robinson” to someone between the ages of 40 and 70 can only bring to mind the 1967 movie The Graduate, in which young Benjamin (Dustin Hoffman) is seduced by the older, married Mrs. Robinson (Anne Bancroft). The song from that movie, “Mrs. Robinson,” was a hit by Simon and Garfunkle.

Somehow, a song about adultery is used to commend Jackie Robinson for his character. “Character,” the poster says. “Pass it on.”

Sure, it could be a simple congratulatory message and not a reference to The Graduate. But it seems to me very unlikely that the people putting this ad together were unaware of the connection. Maybe they only know the catchy chorus of that song or the simple familiarity of the phrase. Maybe they really don’t know the song is about a sexual predator whose character isn’t exactly something to praise.

And maybe — just maybe — it’s a campaign too clever for me to grok. Maybe it’s “let’s take this phrase about adultery, turn it around and make it the opposite of what people think!” Kind of like how some people take the word “elite” and use it to mean the exact opposite of what it means.

I know calling the Robinson poster an ad isn’t quite precise. It’s a public service announcement of the most general kind. Values.com is part of The Foundation for a Better Life. The campaign is from a not-for-profit organization whose aim is to spread goodwill and nothing more. At least that’s what they say.

Tracking down who’s behind Values.com from their site isn’t very easy, which made me suspicious. Why not come out and say who’s pulling the strings? When I found out it was one of the many projects from Philip Anschutz, a Colorado businessman known for supporting conservative and religious organizations, I wasn’t sure what to think. Maybe the song’s lyric of “Jesus loves you more than you will know” is some clue.

Who’s Philip Anschutz? He’s rich, he’s religious, he’s humble and he’s very private. At least that’s what you get from this 1999 profile and from this 2010 profile.

On the face of it, I suppose the campaign is pretty harmless. But why not say “Hats off, Mr. Robinson!” or “Great Job, Mr. Robinson”? Why conjur specific images of adulterous sex in a campaign about general concepts like values and character?