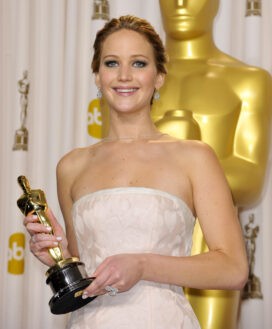 Jennifer Lawrence earned her first Academy Award nomination as best actress for playing an Ozark Mountain teen in search of her missing father in the independent movie Winter’s Bone (2010).

It was a fast rise for an ambitious Kentucky kid who had survived her share of audition turn-downs and then three seasons on an obscure TV sitcom (TBS’s The Bill Engvall Show, 2007-2009).

In 2008, Jennifer Lawrence landed prominent roles in The Burning Plain with Charlize Theron and Kim Basinger and The Poker House with Selma Blair — edgy indie films featuring murder, poverty, desperation and so forth. After the similar tone of Winter’s Bone, Lawrence posed for a 2010 swimsuit spread in the men’s magazine Esquire — a business decision made in part, she said, to show a brighter side.

Jennifer Lawrence sealed her reputation as a major player by winning the Academy Award as best actress for her role as an emotionally volcanic young woman in Silver Linings Playbook (2012, opposite Bradley Cooper and directed by David O. Russell). She was Oscar-nominated again for the drama American Hustle (2013) and the based-on-a-true-story Joy (2015) — both films also co-starring Cooper and directed by Russell.

Another Winter’s Bone Oscar nomination (best supporting actor) went to John Hawkes, who played the uncle of Lawrence’s character… Jennifer Lawrence grew up in suburban Louisville and attended middle school there, then earned a GED, the equivalent of a high school diploma, while pursuing acting in Los Angeles and New York City… Before Jennifer Lawrence, the last Louisville-born actor up for an Oscar was Irene Dunn, who was nominated five times, lastly in 1948 for I Remember Mama.

Something in Common with Jennifer Lawrence