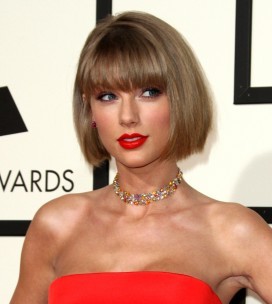 Taylor Swift is 33 years old
Born: December 13, 1989
Birthplace: Reading, Pennsylvania, United States
Best known as: The pop superstar who sang the 2009 hit "You Belong With Me"
Buy from Amazon.com: Music by Taylor Swift

Taylor Swift broke through in 2006 with her hit song “Tim McGraw,” recorded when she was still 16 years old. Over the next decade she went beyond country to become one of the world’s biggest pop music and social media stars.

Raised just outside of Reading, Pennsylvania, Taylor Swift began singing at local events when she was a kid, and even sang the national anthem at a Philadelphia 76ers basketball game when she was 11. To help Swift pursue her career in country music, her family moved near Nashville, Tennessee when she was 13.

Her sparkling blonde beauty-pageant looks and pitch-perfect country vocal style made her a star on Country Music Television, and the video for “Tim McGraw” — a wistful ballad of romantic longing (“When you think Tim McGraw / I hope you think of me”) — was voted a fan favorite.

She released her self-titled debut album in late 2006 and quickly became a star singer and songwriter; she was nominated for a Grammy Award and by the Academy of Country Music as best new female vocalist.

Before she was even 18, Swift was touring nationally with top stars such as Brad Paisley and Rascal Flatts, singing songs about love, heartbreak, and kisses in the rain. Her 2008 album Fearless produced the hit singles “Love Story” and “You Belong With Me.” Her third studio album, Speak Now, was released in 2010 and included the singles “Mine,” “Back to December” and “Sparks Fly.”

By then she was a global phenomenon, playing to packed arena concerts and getting heavy coverage in gossip magazines for her whirlwind romances (and breakups) with actor Jake Gyllenhaal and others.

Her 2012 album Red included the hit single “We Are Never Ever Getting Back Together.” She launched another massive world tour behind her pop-oriented 2014 album 1989, which included hit singles like “Shake It Off” and “Bad Blood” (the latter featuring Kendrick Lamar).

1989 won three Grammy Awards: for album of the year, best pop vocal album, and best music video (for “Bad Blood). They were her 8th, 9th and 10th Grammys overall, to go along with (at that point) her 19 American Music Awards, 11 Country Music Awards and hundreds of other industry honors.

In 2015, Forbes magazine listed her at #64 on its annual “100 Most Powerful Women” list, making her the youngest woman ever to make the list.

In 2017 she won a (mostly symbolic) court case after a DJ groped her during a photo shoot. She also released the album Reputation and the single “Look What You Made Me Do.”

By 2021 she had won the Grammy for Album of the Year three times, the first time for a female performer.

Something in Common with Taylor Swift