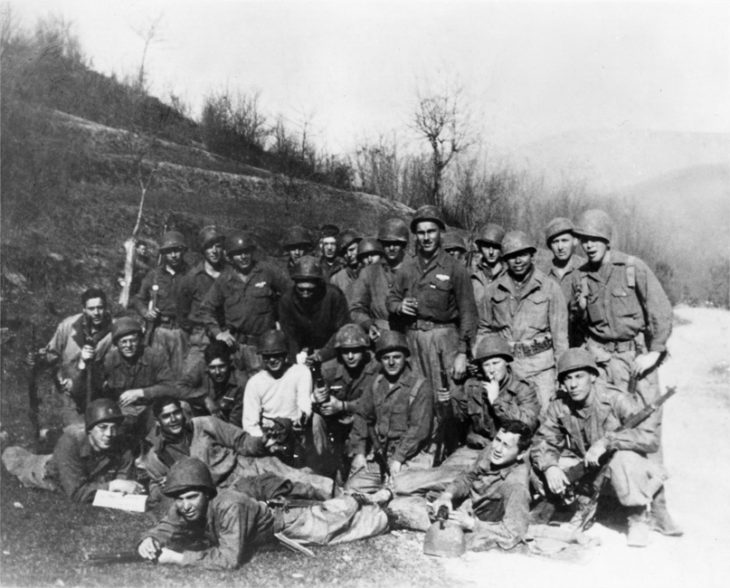 Bob Dole with Company I, 85th Infantry, 3rd Battalion, in 1945. Dole is at far left, holding the rifle with the light jacket and no helmet. Dole was injured later that year. (Robert and Elizabeth Dole Archive)

Bob Dole died this morning at age 98 after a lifetime of public service, as national politics used to be called without irony.  He was elected to the U.S. Congress from Kansas in 1960, then moved up to the U.S. Senate in 1968. Eventually he was the Republican nominee for president in 1996, when he was beaten by incumbent Bill Clinton. (Clinton later awarded him the Presidential Medal of Freedom, because such gestures of respect were also part of national politics once.)

Dole was gravely injured in battle during World War II. He was a lieutenant in the hard-fighting 10th Mountain Division, and got shot up on April 14th, 1945 — just weeks before the war ended. Dole got hit during a firefight in the Appenine Mountains; it was an unknown round — maybe machine-gun fire or a mortar — which he later wrote, “ripped apart my shoulder, breaking my collarbone and my right arm, smashing down into my vertebrae, and damaging my spinal cord.”

Dole couldn’t move. A fellow soldier gave him a huge shot of morphine, then wrote “M” on his forehead in Dole’s own blood so medics wouldn’t overdose him with a second shot when they arrived. He lay on the battlefield for nine hours before he was evacuated.

Dole eventually battled back from his injuries, but his right arm was shattered. Throughout his political life he kept kept a pen clutched in his disabled hand to make it appear normal and keep people from trying to shake it.

All of this is to say that it’s a surprise to see just what a muscular guy he once was: 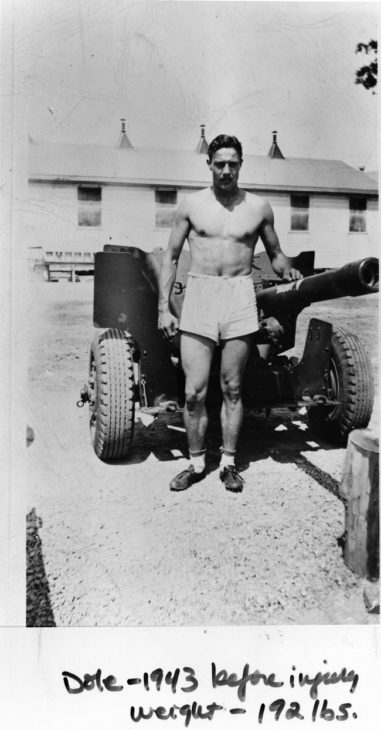 Wow! This is Dole the year he turned 20, standing next to an artillery piece. He had enlisted in the Army the year before, and obviously spent some time bulking up. Look at those legs! He was 192 pounds, according to the photo caption, and most of it muscle.

Dole had been a three-sport athlete at the University of Kansas. He thought he might go home after the war and become a doctor, but the Nazis had other plans. 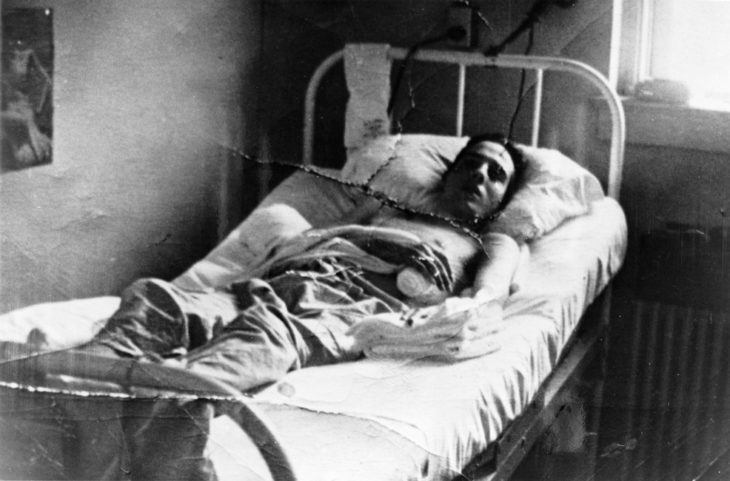 He did end up in a medical setting. Doctors in Italy put Dole in a full body cast — “from his ears to his torso” — and sent him back to the States. This is Dole later in 1945, recovering from his wounds in Winter General Hospital in Topeka, Kansas. His weight then: 122 pounds. That’s right, seventy pounds lighter than in the photo above.

Dry wit was always a Dole hallmark. He said later, “Prior to my injury I was a pretty good athlete, but afterwards I learned to apply myself more and made good grades for a change.” 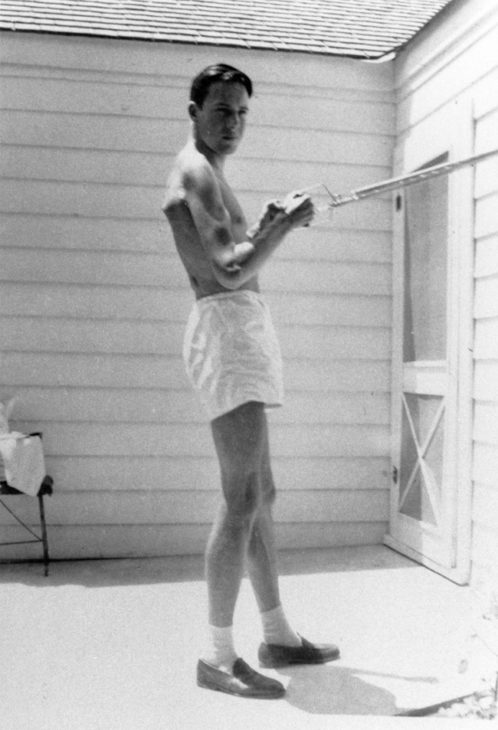 Here he is in 1947, pulling weights at his parents’ home in Kansas. He doesn’t look much beyond 122 pounds here yet. Everyone was skinnier in those days, but he had reason to be skinnier than most.

Dole was never a favorite of mine politically, and he even endorsed GOP nominee Donald Trump in 2016 and then, unconscionably, again in 2020. “I’m a Trumper” he told USA Today just a few months ago. Sigh.

But let’s not get into that today, the day of his death. Here’s a salute to the vigorous and muscular young man he once was, and to the terrific sacrifice he made in the war.

(For many more photos of young Bob Dole, see the Robert and Elizabeth Dole Archive at the University of Kansas.)