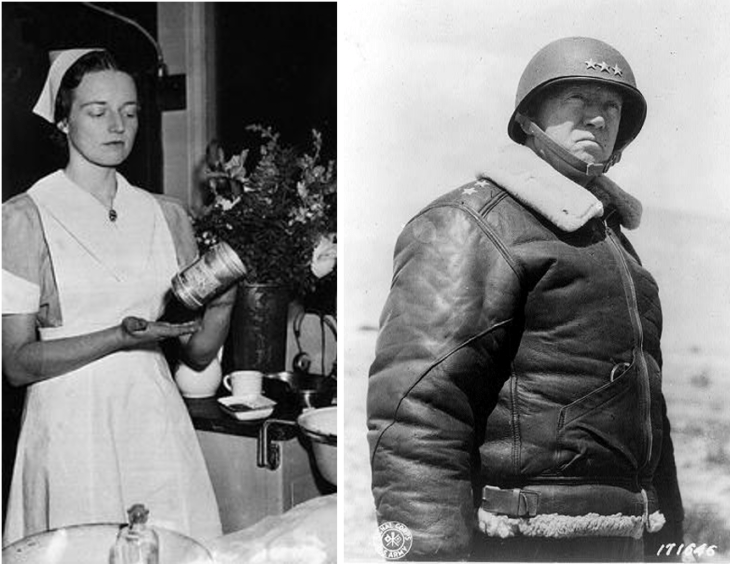 “May the Great Worm gnaw your vitals, and may your bones rot joint by little joint!”

Seems that just days after Patton’s untimely death after a car accident in 1945, his widow asked for a meeting with Jean Gordon, Patton’s alleged mistress. The two met in a Boston hotel, where Beatrice Patton skipped the pleasantries and uttered the curse above. It was said to be “a feared curse she had learned in Hawaii years before.”

Hawaiian or not, it got the job done: Gordon killed herself a few days later, with “pictures of the general strewn around her.”

Jean Gordon was a Red Cross nurse trainee and “donut girl” who was actually the Pattons’ niece: Gordon’s mother was a half-sister to Beatrice Patton. Gordon allegedly had a “dalliance” with the General in Hawaii in 1936, and then returned to be part of his entourage during the war. That set off alarm bells with Beatrice, who turned out to be a champion grudge-holder.

Now it seems that Gordon may not have been Gen. Patton’s mistress after all. “Patton repeatedly boasted of his sexual success with Gordon, but his biographers do not find it credible… Under severe physical and psychological stress, [Patton may have] made up claims of sexual conquest to prove his virility.” Well, maybe. That sure ain’t what Mrs. Patton thought.

Beatrice herself died eight years later, in 1953, after falling from her horse. Curses are tricky things.