Dick Cheney has a new heart.

“Former Vice President Dick Cheney, a 71-year-old with a long history of cardiovascular problems, had a heart transplant Saturday and is recovering at a Virginia hospital.
The odds of survival are good. More than 70 percent of heart transplant recipients live at least five years, although survival is a bit lower for people over age 65.
The former vice president suffered a heart attack in 2010, his fifth since the age of 37.”

Five heart attacks! He’s a tough one, it must be said. His old heart had already given out and for the last two years his blood was being pumped by a battery-powered left ventricular assist device, or LVAD.
“Not even Cheney knows the donor’s identity,” says the Associated Press. The question is, does the donor’s family know the heart went to Cheney? 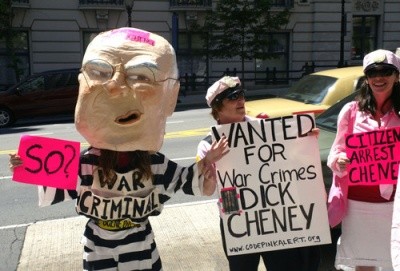 Cheney’s not popular with liberals, civil rights fans, Iraqis, waterboarding victims, or Americans in general. (His approval rating as he left office: 13%.) Some call him a war criminal. Imagine the shock of having a son or daughter or loved one die and donating the heart… and then hearing the next day that Dick Cheney had gotten a heart transplant and would live on.
It’s like a reverse twist on Ronald Reagan telling his surgeons, “Please tell me you’re Republicans.”
With the average five-year window, Cheney’s new heart should last him past the 2016 elections. So he may yet get another chance to run a vice-presidential search and make himself look like the best candidate. If the nominee is sucker enough to buy it, that is.
See our Dick Cheney biography »