General George C. Marshall, here’s a salute to you on Memorial Day. You were the greatest. 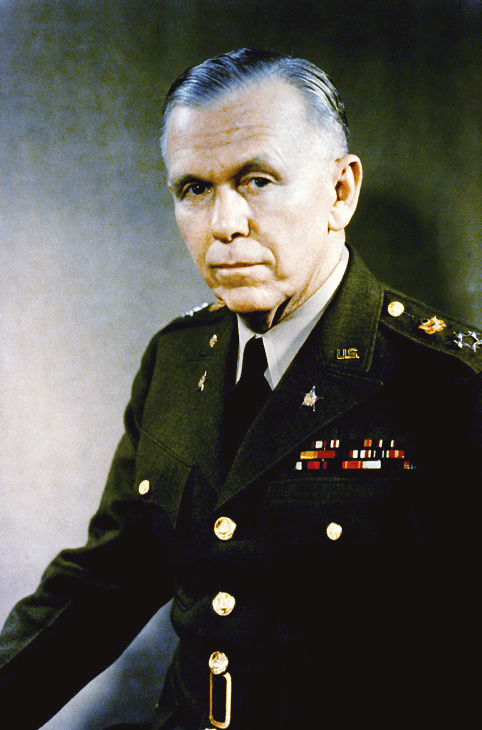 Yesterday we joked about Adrien Brody‘s cool smirk, but when you’ve just been the key organizer of army that helped win World War II, you can just quietly look at the camera. And you can arrange your five stars in a modest little circle on your shoulder, too.

Gen. George Marshall gets less credit than Dwight Eisenhower and Douglas MacArthur and some of those boys because he wasn’t out there leading troops. He was the planner and organizer who made many of the Army’s successes possible. That’s why he was America’s first five-star general.

After the war he was Harry Truman’s Secretary of State from 1947-49, and all he did in that job was organize the European Recovery Program — AKA the Marshall Plan — that generously helped rebuild Europe after the war.

For that act he was given the Nobel Peace Prize of 1947.  He said in accepting:

“There has been considerable comment over the awarding of the Nobel Peace Prize to a soldier. I am afraid this does not seem as remarkable to me as it quite evidently appears to others. I know a great deal of the horrors and tragedies of war. Today, as chairman of the American Battle Monuments Commission, it is my duty to supervise the construction and maintenance of military cemeteries in many countries overseas, particularly in Western Europe. The cost of war in human lives is constantly spread before me, written neatly in many ledgers whose columns are gravestones. I am deeply moved to find some means or method of avoiding another calamity of war.”

He also said, about the importance of citizens of various countries mingling with each other:

“In my own case, for example, I spent two and one half years in France during the First World War. Frequently I was quartered in the households of the French peasantry and spent long evenings by the kitchen fires, talking far into the night. I came to know them well, admired them, and in some cases came to love them.”

Would that our politicians today would stop making dumb statements about “freedom fries” and the French (and all of Europe, for that matter) and take a cue from General Marshall.  Happy Memorial Day!