Movie Review: Up In the Air
Directed by Jason Reitman
At the AMC Newport on the Levee 20
Pre-movie meal: pomegranate seeds and a half-shot of JTS Brown

Is there any other movie star in America today who would give us an honest peek at his starting-to-get-wrinkly 48-year-old neck the way George Clooney does near the end of Up In the Air?

No. No, there isn’t. There are many (Nicholson and Eastwood come to mind) who’ve done it when they’re 64 and they can seem heroic for showing their age plainly onscreen, or can play it for silly-sex-scene laughs as a defensive maneuver. (*cough* Harrison Ford *cough*) But otherwise it won’t happen, not if a star is still young enough to play leading men, even if only in his own mind.

It won’t happen because most actors would never let that moment stay in the script, and even if they did the cinematographer (if he values his job) would shoot it so that the star looks great anyway, and even then the director would hesitate to shoot it because the studio would never leave it in or else the actor’s going to change his mind when he actually sees the rough cut. And then you’re in a bad spot. 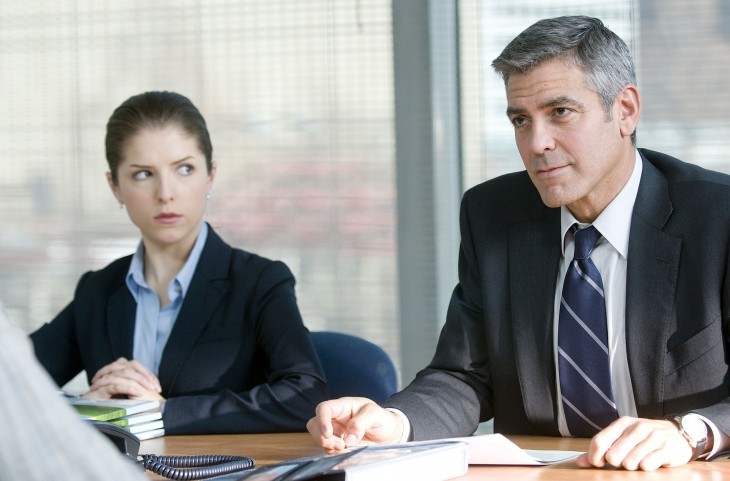 So God bless George Clooney for being a enough of a powerful star to push his 48-year-old neck through all of that, and for being enough of a man to show that neck. Because his willingness to have those honest moments makes this movie.

You know the story basics: Clooney is a corporate terminator, a guy who flies around the country firing people. He has the gall to tell them in that same moment, in practiced self-actualization-speak, that it’s the greatest thing that ever happened to them because now they can follow their dreams and conquer mountains and be the gourmet chefs they always wanted to be.

Not every terminated 53-year-old middle manager is glad to hear this glorious news. 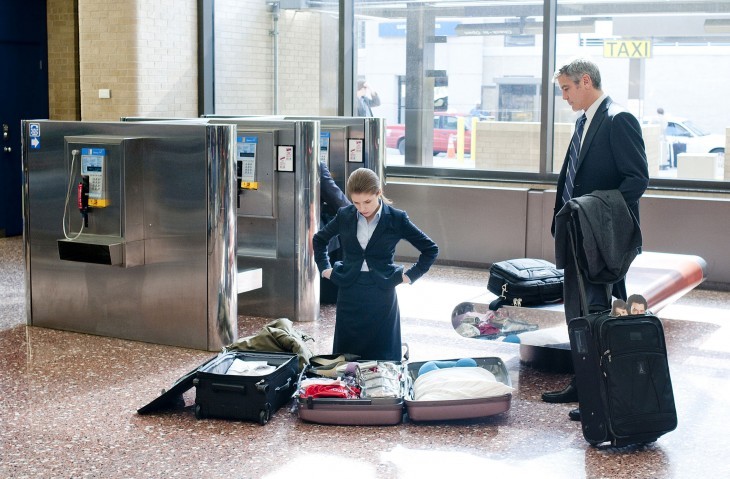 The real story, though, is about Clooney’s gleeful embrace of rootlessness, in the form of first-class flying and Hilton hotel stays and a carry-on bag he never has to check as luggage.  His goal: to hit 10 million frequent flyer miles and become a made man, American Airlines-style, with super-duper-elite status for life.

Which is a goal that seems believable and even charming, because Clooney is so darned smooth.  Up In the Air is like Clooney’s last Oscar-nominated film, Michael Clayton, in one big way: in both cases, the lead is supposed to start as a jerk and then slowly come around to good-guy status, as the audience roots for him to come around. With Clooney the problem is that even when he plays a jerk, we like him right away, instinctively. It blows up that whole emotional arc.
That’s dangerous here because Up In the Air is gently asking the question, “Is this seductive rootlessness and motion-for-the-sake-of-motion really where we all want to be going with our lives?” With Clooney on screen the answer is “Yes! Yes it is!”
That said, Up In the Air deserves all kinds of credit for taking the steps of the standard movie plot, as well-practiced as the steps for making the morning coffee, and spinning them around to surprise us. There must have been five times when I thought “Oh, now THIS is going to happen,” only to have that thing not happen at all. This movie has its surprises.
And the two women cast with Clooney — Vera Farmiga as his fellow-traveler-of-a-certain-age, and Anna Kendrick as his young go-getter protege — are just beautifully cast.  And appropriately hot in that we’re-all-pretending-they’re-not-really-hot-Hollywood-actresses-because-this-is-a-thoughtful-movie way. If Farmiga doesn’t get tons of opportunities out of this, the way Virginia Madsen did out of Sideways, I’ll be amazed.  (Though honestly, playing believably sexy opposite George Clooney is a wee bit easier than playing believably sexy opposite Paul Giamatti.)
Also, Sam Elliot appears in a witty cameo that would be a hilarious cameo if the moment he appears into weren’t so sad. This isn’t entirely a comedy/romance, even if it’s billed as such.

I liked Up In the Air a lot. Is it a possible best picture winner? Jeepers, who even knows what qualifies any more? But it will get nominated. And I have a strong, strong feeling that Clooney is going to win his first best actor Oscar for this film.  (He won best supporting actor for Syriana in 2008.)  Because, well, because he’s been in a ton of good movies and the right number of blockbusters and because it’s time. And because he risked his neck.

I give Up In the Air 8.7 million frequent flier miles out of a possible 10 million.

And now for a downer ending:  Shame on AMC for nearly driving us from the theater with an unconscionable (and unbeLIEVable) 30 minutes of ads and trailers before the movie. Truly, 30 minutes. (What are we, the sap audience for Transformers III?) It was all capped off, after a long series of increasingly loud and violent trailers, by a stupid pretend-hip promo demanding we turn off our cell phones: “Please, don’t add your own sound to the movies.”

Followed by one more ad for Coke.

Tags: Anna Kendrick George Clooney Movie Reviews Up In the Air Vera Farmiga
Meet the 80-Something Harvard Prof Who Taught Iranians How to Protest
Dick Clark Still Rockin’ at 80