[Editor’s note: This story was warmly received when it first appeared in this space on Thanksgiving 2012. We’ve brought it back for a return visit in 2014. Happy Thanksgiving, everyone! ] 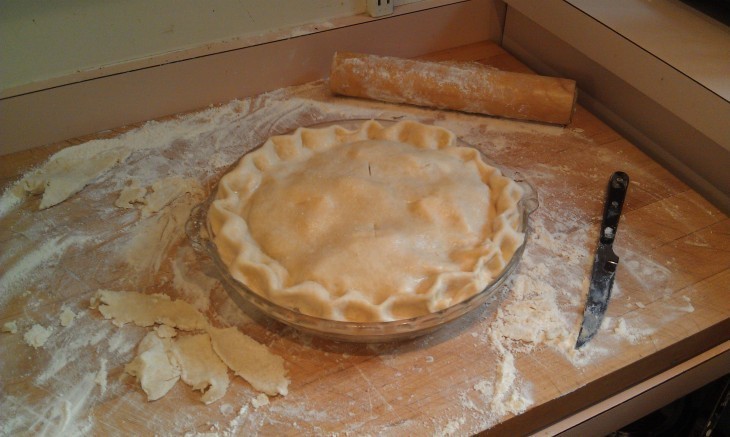 Thanksgiving is for pies, and when I make pies I think of my grandmothers, Grace and Lillie.

I got up at six this morning to make an apple pie to take to Thanksgiving dinner with friends, and I loved being up in the kitchen with the coffee brewing and turning the oven on to 375 degrees. I know my grandmas did the same thing on Thanksgiving — got up even earlier, no doubt — and I like knowing that.  But I always think of them any time I make a pie. 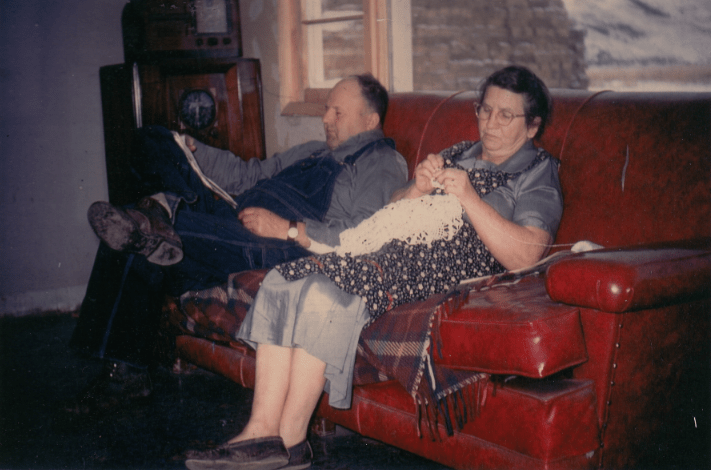 Grace — Grandma Courtright — was my mom’s mom. I remember her hands, short and strong and knobby like a tree root by the time I knew her. She cooked for a farmer husband, six kids and a bunch of farmhands from about 1920 into the 1950s, and then there were another 20 years of cooking for Grandpa and the Grange and the grandkids. Multiply it out, 365 x 3 meals a day x 8 people for 30 years or so… 262,000 meals. Just a few.
I don’t really know where she found time to make pies. Pies take a long time to make, or at least they take me a long time to make, and I guess I’ve made a few hundred in the last 30 years. Pie-making can be a hassle all the way through, really: making sure you’ve got enough shortening, peeling the apples, making the dough, forgetting to get the rolling pin out before your hands are covered with dough… you think “I’ll just whip up a pie” but it’s really a good hour or more to put one together. And then there’s flour all over.
So between cooking actual breakfast, lunch and dinner, and cleaning up, and handling six kids, I’m not sure where Grandma Courtright found the time to knock out a few apple or cherry. But she did.
We had to travel way east across the great state of Oregon to see her, and she passed on when I was 17, so I really didn’t see Grandma Courtright cook that much. We all saw the results:  pantry shelves loaded with jars of canned cherries and pears and vegetables, not to mention the huge farmer breakfasts she’d cook on the wood stove for us. When I think of her cooking, I really think of standing by the kindling box, next to the woodstove where it was warm and smelled like good burning fir wood, watching her fry eggs in an iron skillet on the stove. Amazing. 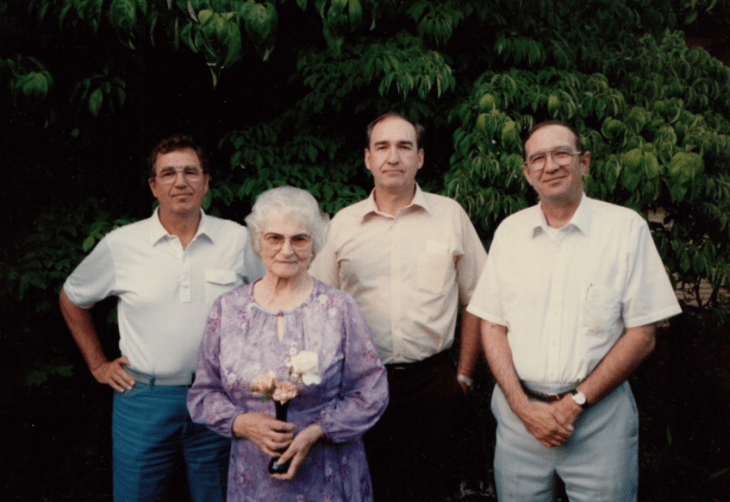 Grandma Lillie Holznagel raised three boys, my dad included, in Hillsboro, not so far from us, so I saw her cook a lot on Sundays and birthdays and Thanksgivings. She and mom had a good thing going in the kitchen when the other was cooking — “what can I do for you?” — and one would whip out mashed potatoes or asparagus while the other was finishing the swiss steak or chicken casserole. Real teamwork.
When I think of Grandma Holznagel making pies I think of her sealing the top crust, working her way around the edge, and then brushing it with a scrambled egg. Egg makes the top brown up more, she told me.  Mom uses milk instead, and so I use milk. But I sprinkle a pinch of sugar over the top of the pie the way Lillie showed me. It’s just for looks.
Mom also taught me grandma’s trick of putting a little baking powder in with the flour to make the crust lighter.
When I make pies I picture Lillie and Grace, at their kitchen counters or at the oven, with flour on their aprons. I wonder if they got irritated by the parts where I get irritated, like when you add water to the flour and salt and shortening to transform it into dough. For me, it never works right. You’re supposed to sprinkle the water lightly, tablespoon by tablespoon, and then toss it with a fork — gently, gently! — until it’s all in a loose ball. But the moisture is never enough, it’s just a damp pile of flour, and I end up having to mash it all together roughly with my big hands. I wonder if they had the same problem and if it bugged them every time the way it bugs me.
Mom taught me to put an ice cube in the water before sprinkling it on, because cold water is supposed to work better. I think of mom when I do that, but it still doesn’t work that well. 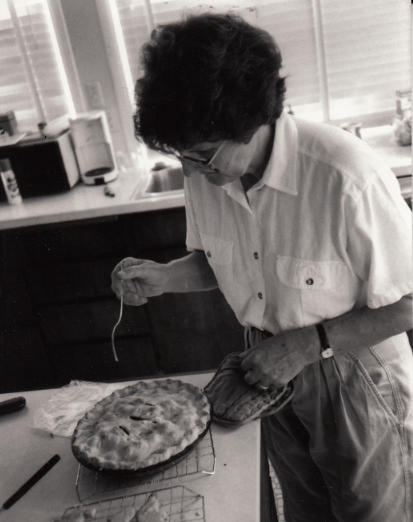 I think of Grandma Holznagel when I slice the apples, because I watched her slice a lot of apples and we sliced apples together sometimes. (Also Oregon strawberries in the summer for shortcake.) She and mom both showed me how to turn the apple while holding the paring knife blade just so, drawing it back toward your thumb. When I slice apples now I feel like I totally know what I’m doing and that I look the part of a real grandma-style kitchen cook.
Grandma Holznagel may have been the one who told me to slice the apples thinly for a more tender filling. (And now I frown slightly at chunky apple pies.) Mom told me that Granny Smiths or Newtons were the best pie apples. I had to learn for myself that putting double the cinnamon in an apple pie doesn’t make it better.
Why do I think of Grace and Lillie when I make pies when I don’t really think of them if I’m making, say, scrambled eggs or spaghetti?  I don’t know. Pies get down to the home and hearth in some deep way. When I take a hot pie out of the oven, and look at the crust a little critically to see if it browned just right, I just know that Lillie and Grace did the very same thing. It must have given them the same feeling of satisfaction and of being properly alive and in exactly the right place. 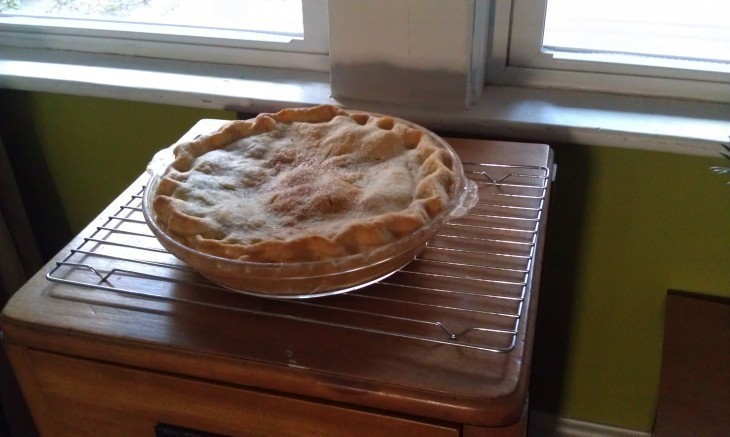 It would be fun to have a chance to cook with my grandmothers for one more afternoon and maybe make some pies side by side. But I guess I’m doing that already.
We’re all here because our grandmothers had kids, and nurtured them, and sometimes made pies for them. What a thing to be thankful for!