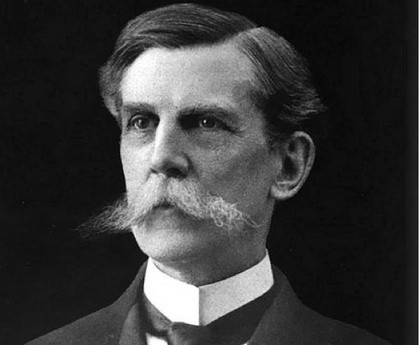 One of the all-time superstars of American jurisprudence, Oliver Wendell Holmes, Jr., was born on this day 170 years ago.

All Oliver Wendell Holmes did was survive three different woundings in the Civil War (including a bullet through the neck at Antietam), teach law at Harvard, serve 20 years on the Massachusetts Supreme Court, and then serve almost THIRTY years on the U.S. Supreme Court.

By the time Holmes was done in 1932 he was 91 years old and the Court’s oldest justice ever.  (He still holds the record.) By all accounts he brought a gigantic intellect and an open heart to his work; he was called “the Great Dissenter” for his many principled stands against the majority.

Holmes was also a top-notch public speaker.  His 1884 Memorial Day speech, now known as “Our Hearts Were Touched With Fire,” is a revered classic:

The generation that carried on the war has been set apart by its experience. Through our great good fortune, in our youth our hearts were touched with fire. It was given to us to learn at the outset that life is a profound and passionate thing.

…But, above all, we have learned that whether a man accepts from Fortune her spade, and will look downward and dig, or from Aspiration her axe and cord, and will scale the ice, the one and only success which it is his to command is to bring to his work a mighty heart.

Such hearts — ah me, how many! — were stilled twenty years ago; and to us who remain behind is left this day of memories.

It’s a long speech and flowery, as was their wont in those days. But it’s also truly generous in spirit, and well worth a read on the 170th anniversary of this great man’s birth.

Happy birthday, Justice Holmes, wherever you may be.