Sir Isaac Newton in a rather handsome portrait from 1689 by Godfrey Kneller.

How can this be, Mr. Gravity Man? Let’s talk it out.

The key event in the Isaac Newton birthday conundrum is the Great Calendar Adjustment of 1752. England switched in that year from the old Julian calendar (ordered by Julius Caesar in 45 BC) to the newer Gregorian calendar (ordered by Pope Gregory XIII in 1582). England had a problem to solve: the Julian calendar had been doing a good job generally, but it overcorrected just slightly for the extra fraction of a day that exists in every solar year. Today we adjust for that with a leap year every four years, but under the Julian calendar the dates and seasons were drifting out of synch by one day every 128 years.

That may not sound like much, but it was enough to throw things off by 11 days between 45 BC and 1752. Another few millennia and it would have been Christmas in July, as it were. Catholic countries had already fixed this by adopting the new Gregorian calendar in the 1500s. The English, cranky and anti-Catholic, held out until their Julian calendar was so screwed up that they had to switch.

(Also, and this is more complicated: the Gregorian calendar had also shifted New Year’s Day from March 25th — where it was for years because that was Annunciation Day, the presumed moment when Mary became pregnant with Jesus of Nazareth — to its more sensible date of January 1st. The Connecticut State Library has as clear an explanation of this switch as can be hoped for.) 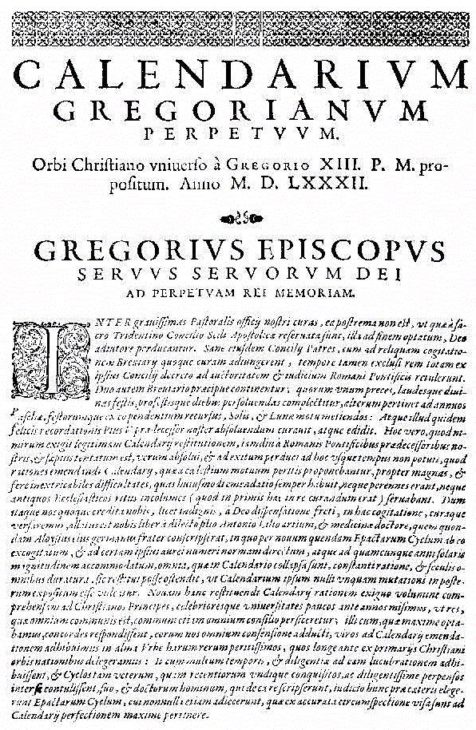 The first page of Inter Gravissimas, the papal bull in which Pope Gregory XIII announced his new calendar in the year MDLXXXII (1582).

So in 1752 the English rejiggered their calendar by switching New Year’s Day back to January 1st, and then dropping 11 days to line up with the Gregorian calendar. For that one year, in England, September 2 was immediately followed by September 14th. Problem solved!

The boys at the Royal Observatory must have gotten quite a thrill out of it.

Back to Sir Isaac Newton. The physicist was born after Gregory XIII’s edict in 1582 but before England changed in 1752. He really was born on Christmas Day in 1642 as it was reckoned in England old-style, under the Julian calendar. But with the switch to Gregorian, his birthday suddenly slid to January 4, 1643 in modern reckoning.

Today we stick with the Gregorian calendar for consistency across all years and people, so Isaac Newton is no longer saluted as a Christmas baby but rather as a January 4th baby. We gain accuracy, but (alas) lose that juicy bit of Isaac-Newton-was-born-on-Christmas trivia.

And if the English seemed a little slow on the uptake, dig the Russians: they didn’t change their calendar until after the *1918* revolution that brought Vladimir Lenin to power. By then, they had to add still another day to catch up. That’s how Lenin’s birthday moved from April 10 to April 22.

Barbara Mandrell ponders the Gregorian Calendar with the help of the Blue Man Group. (Nikki Nelson/WENN)

Which is all too bad. Modern Christmas Day babies like country singer Barbara Mandrell and political fixer Karl Rove don’t quite have the historical heft of a precedent-setting physicist like Isaac Newton. But such is progress.

If only Sir Isaac were here today, his birth-mate Barbara Mandrell could croon “Happy birthday, Mister Precedent.” As it is, we’ll just have to send Isaac Newton our best wishes across the ages. Which we do!