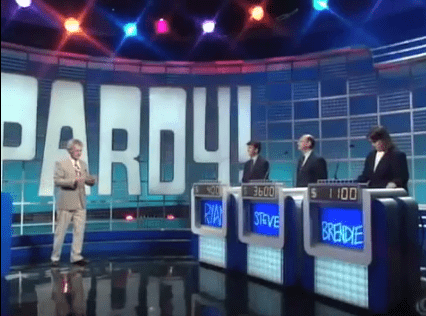 Jeopardy! has just posted one of my full games from 1994 (20 years ago!) in honor of their Battle of the Decades tournament.  It’s not clear why they chose this episode; it was my fourth show and one of my clumsiest.

It also happens to be the show where I blurted out to a national TV audience that I was single and available.

This is the story of what happened next.

To back up a moment, Alex Trebek and I must have been running out of things to talk about. The producers give him a card with 4 or 5 talking points, and on the air he chooses whatever he wants. In previous days we’d talked about how I was a writer for CD-ROM learning games (speaking of 1994!) and how in high school I had dug a grave with friends to pay softball league fees for our team, the Fuiten’s Mortuary Roadrunners.

Apparently Alex didn’t like the remaining choices on the card, because he started this exchange:

Alex: Ryan Holznagel is our champion, from Forest Grove, Oregon, originally. Where do you make your home now?
Me: I live in Portland, Alex, in the northwest sector.
Alex: Married?
Me: Single… live in a studio apartment… all by myself… and available!
Alex: And he has just won 43,000 dollars and change on Jeopardy!

It was a surprise to hear those words coming out of my mouth. I was in fact 33, single and looking, but it wasn’t anything I’d planned to announce from my podium. On the other hand, Alex may have been teeing me up for just that purpose. You never know with him, but at the end of that clip you can see his glee at wrapping up another contestant chat with a zinger.

I didn’t think much more about it. I won the game, lost the next day, and was a very happy four-time Jeopardy! champion.

Fast forward six weeks to a Tuesday afternoon, November 29th, the day this show aired. I was working at my writing office downtown when, at 4:28, the phone rang.

Then followed an awkward five-second silence.

She turned out to be a grad student at Ohio State who had just seen the show on Eastern time. As the show ended, she called directory assistance (we did that in those days) and then dialed me immediately without thinking about what she’d say. We finally broke the ice, chatted for a few minutes, and hung up. Five minutes later I got another call just like it.

Wow! At first I was amazed… but then I realized, you did say on national TV that you were available, right?

A few weeks later, two fat manila envelopes arrived from the Jeopardy offices in LA, stuffed with dozens of letters from women who’d also heard me say I was single and available. 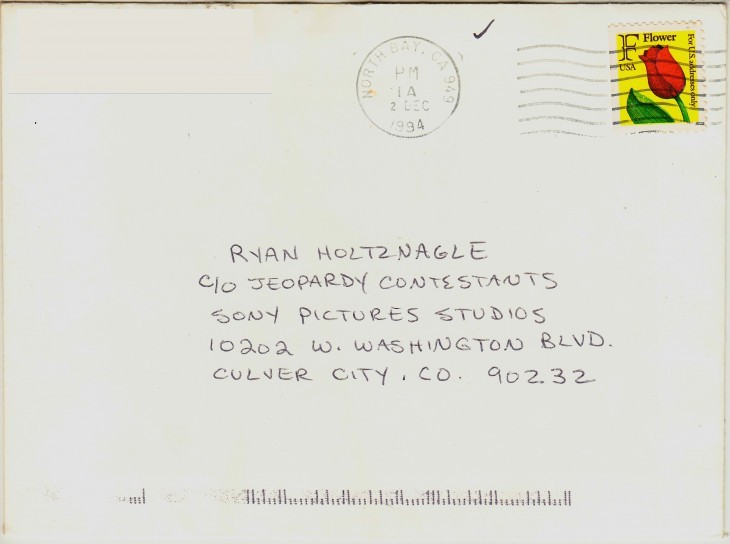 I just now went down into our basement, unstacked some old boxes, and found those envelopes. I thought I might have thrown them out in a move somewhere along the line, but there they were, deep in the files.

What a time machine!

Ukiah, California: “I just saw you on Jeopardy — my favorite show. You mentioned being single and looking for someone…”

From Cambridge, Massachusetts: “I saw you on Jeopardy and heard your call for letters from single women who liked the show…”

From Coeur d’Alene, Idaho: “To the producers of Jeopardy: I would like to know how to get a hold of Ryan. On a previous show he announced he was single and Alex was joking that he was advertising…”

From Woodland, California: “I thought at the time that you looked like a nice guy and wondered if you were single. Then Alex said that yes you were single and looking for that special someone…”

From West 86th Street in Manhattan: “I am interested in contacting Mr. Ryan Holtsnoggle (spelling?) your five-night Jeopardy contestant who completed his stay on your superlative program this evening…”

The letters are handwritten on formal stationery, on note cards with penguins, on yellow legal pads and purple paper, on postcards from Key West and Park Slope, on a Ziggy greeting card, on a Stieglitz photo card from the Metropolitan Museum of Art. 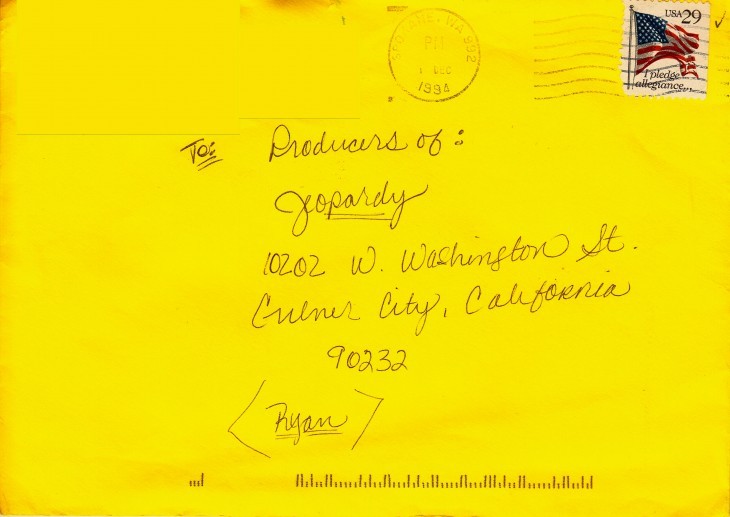 A few were three or four pages long, but most were shorter: friendly, polite and direct. Many of them struck me as the kind of letter I would have written myself if the situation was reversed. The first thing you want to say is, “Look, I don’t usually write to people I see on game shows.”

From Portland, Oregon: “I’m sure you have no idea who I am and this is not something I would ordinarily do. But your ‘single and looking’ status intrigues me.”

From Washington, DC: “I feel quite awkward and embarrassed writing to you.  About a month ago I saw you on Jeopardy… Then just the other day I was surprised to see you again, when you expressed to millions of viewers that you were ‘available.’ So… here I am responding to your announcement. I’m embarrassed and feel strange…”

From Culver City, California: “This seems very silly, but all good things are worth a try! I saw you on Jeopardy recently and was so impressed with your intelligence…”

From Van Nuys, California: “Put this in your silly letter file, but after seeing you I felt compelled to write.”

(On the back of that last envelope I see that I later scribbled a series of Final Jeopardy bet calculations and the phrase, “Who is Sakharov?” Already prepping for the Tournament of Champions, no doubt.)

Risk-taking was another common theme. This was before the Internet made reaching out to strangers an everyday thing.

From Reisterstown, Maryland: “Hopefully this letter made it to you. I saw you on Jeopardy, and figured that if you were brave enough to say on national television that you are single and available, I would be brave enough to write.”

From Port Charlotte, Florida: “I hope it’s not too forward to write to you, but you seemed like a person who was a risk taker and enjoyed the unusual.”

From Collinsville, Texas:  “Going out on a limb I would call this action of mine. Saw you say on national TV you are available. Risky, I’d say.”

From Lucasville, Ohio: “My friend was watching Jeopardy on November 30th when she saw Ryan, the returning champion, saying he was single. She called me and gave me the address of the studio and told me to write. She has been nagging for one year, saying I don’t live dangerously. So, I am writing.”

That last one makes me smile, although it’s not quite so flattering to get a letter that says, “I am writing you to get my pushy friend off my back.”

Some included photos. Others described themselves:

From Florida: “I am almost 27. I have longish blond hair and green eyes. I am 5’3″ and weigh about 100 pounds. I’m pretty good at Jeopardy but always get the Final Jeopardy question wrong.”

I’d also had more phone calls, apparently, though I don’t remember them:

From Bangor, Maine: “It was great talking to you the other night. I apologize for intruding so brashly into your life. Believe it or not, I used to be shy…”

From Columbus, Ohio (the original caller): “Hi! I’m the person who called you at work the other night.”

From Cartersville, Georgia: “Bet you were surprised to get a call from a stranger across the country, probably as surprised as I was that I placed the call to begin with.”

Yes, I was surprised. And totally delighted. The whole thing was incredibly flattering, a huge ego boost. “Calls and letters from women across the country” was not really my normal mode of life. I can remember going through the envelopes one by one, marveling. A green-eyed Florida blond is writing to me?

From Milwaukee, Wisconsin: “On the last show, you indicated you were single and available. I have a lovely daughter living in San Francisco who is also ‘available’ and you seem like just the kid of extremely intelligent young man that would be right for her. If you are interested, you can phone her at…”

From Philadelphia, Pennsylvania: “Saw you on TV expressing your availability, so I’m sending you my daughter’s picture. She is 5’8″, 33 years old, single, never married, teacher… she is Roman Catholic and a staunch Democrat.”

From Portland, Oregon: “My mother, bless her heart, called me a few weeks ago from Albuquerque and said, ‘Do you watch Jeopardy? Turn it on!’ She seemed a little over-excited… So I turned it on for a second just to see who my mom was getting so silly about. ‘Too straight for me,’ I thought, ‘check out that Beatle haircut!’  Then I switched back to my beloved Simpsons.”

“Beatle haircut” was taking it a little far, wasn’t it? That’s a Perry Como haircut, thank you very much.

So, after all these amazing letters, what happened?

I was a busy man for awhile. I can’t swear I wrote back to every letter, but I do remember intending to. I had coffees and drinks with a half-dozen women from the Portland area, including the Simpsons fan. All were very nice, and we certainly had something to talk about, but somehow there was never that spark. One excellent letter-writer from the Bay Area stopped to visit me on her way to Seattle; she became a good friend and still is.

Most letters came right away, but Jeopardy continued to pass on others as they came in.

There were a few long-distance flirtations. In my files I find a batch of letters to and from Palm Beach, Florida, with postmarks stretching into March of the next year. I also had a great long flirtation-by-fax (we did that in those days) with a medical student from Cherry Hill, New Jersey.

Eventually things petered out, like a summer camp romance, and we stopped writing. It’s not clear to me why I didn’t just do the obvious thing early on and jump on a plane to Florida or New Jersey. Possibly that is why I was still single and available at age 33.

In any case, there was no Hollywood ending, no Jeopardy-themed wedding with vows of “What is… I do?” and Johnny Gilbert announcing, “The happy couple will board TWA for a honeymoon flight for two to beautiful ARUBA!” I remained stubbornly single until the 21st century, when I finally found the right woman without saying anything at all on national TV. 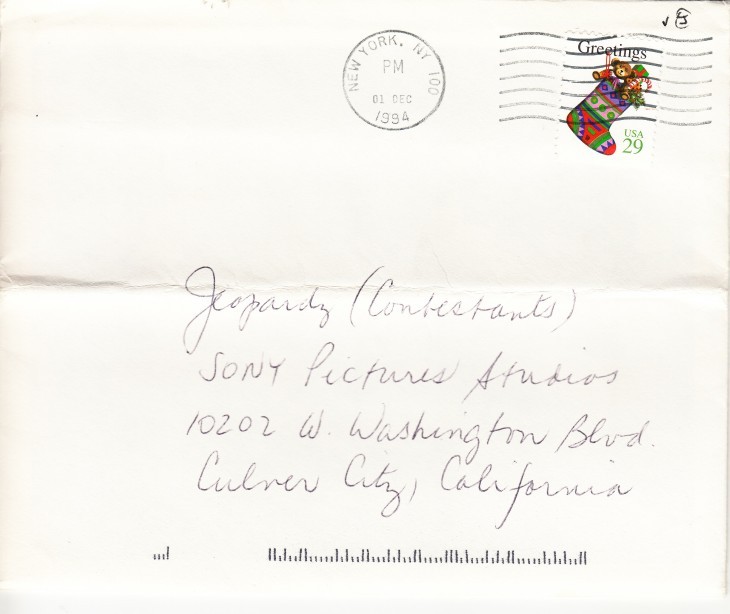 I’m not sure what to make of this bundle of beautiful old letters now.

Anyone who goes on Jeopardy! gets a lesson in the power of television. It’s one thing to know that Jeopardy! has millions of viewers, quite another to have people tell you on the sidewalk, oh, you were in my living room last night. We watched you. Or to say a few words and then get letters postmarked Coeur d’Alene, Reisterstown and Ukiah.

In all my other appearances on the show, before and since, no one has ever written. It took a smile and two words — “and available!” — to open the door. There’s some kind of lesson there, I suppose.

Today, of course, there would be no letters. There would be Facebook friend requests, Snapchat pics, and delightful flirtations by text and email all day instead of getting any work done. To hold these envelopes, with the 29-cent stamps and the postmarks from all over, the careful handwriting and the impulsive scrawls… well, it’s touching. It seems like something from a long time ago.

Most striking of all, I guess, is the simplicity and the sincerity in every letter. There’s very little in the way of irony, snark or face-saving wisecracks. They’re all variations on a theme: “You said you’re available. Me too. Taking a chance here.”

How human, and how daring. And how lucky for me. Good for them! Thank you, ladies, from the year 2014.