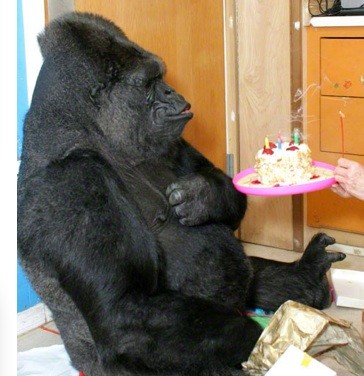 Koko the Gorilla, the ape who learned sign language, turns 40 today. Happy birthday to her!

Koko was born in 1971 at the San Francisco Zoo. That’s where she was found by a Stanford graduate student, Penny Patterson, who has made gorilla sign language her life’s work.

Gorillas live into their 40s and even 50s in captivity, so Koko is still in ripe middle age.  Gorillas can “technically” bear children into their 40s, but the chances of Koko having a child of her own seem slim at this point. 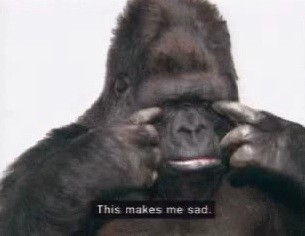 Maybe it’s just as well, since Koko is surely the only lowland gorilla to ever be tangled up in a sex harassment suit.

Patterson says that Koko has a vocabulary of over 1000 words.  Detractors say that while apes like Koko and Washoe the Chimp do make signs, the “communication” is really being driven by the handlers, not the apes. Judge for yourself: here’s a video of Koko getting a visit from the late Mister Rogers:

(A new documentary about another sign-language ape, Nim Chimpsky, seems to come down on the “it ain’t happening” side of the debate.  But then, that’s a mere chimp, not a gorilla. You can read more about that here.)

Patterson’s Gorilla Foundation is celebrating Koko’s 40th with a haiku contest. The winners are due to be announced today.  Enjoy the poems, old girl!

Tags: animals Koko the Gorilla Nim Chimpsky Penny Patterson Sign Language Washoe
Roger Ebert Is Not Too Keen on ‘Transformers 3’
How Well Do You Know The Declaration of Independence?