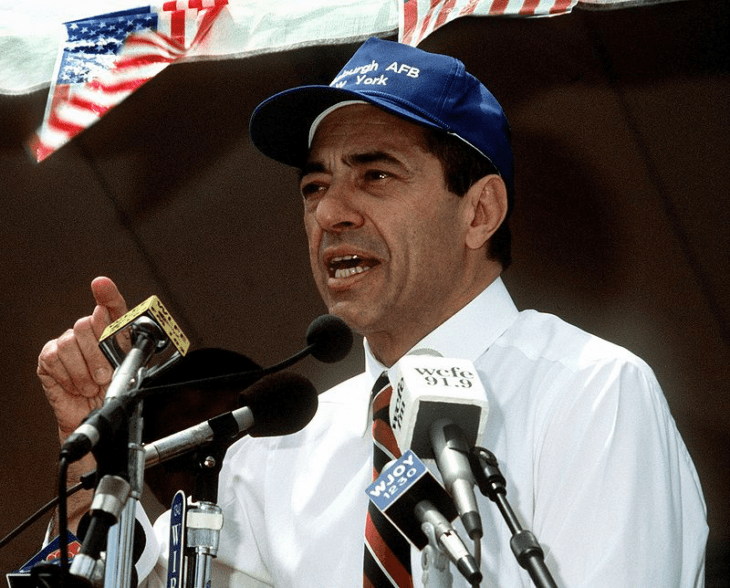 Mario Cuomo died on January 1 at age 82. His son, Andrew Cuomo, had just been inaugurated for his second term as governor of New York — the same post Mario Cuomo held from 1983-1994.

Mario Cuomo was known as one of the great political thinkers and speechmakers of his era. In a NY Times story from 1992, he described to Michael Winerip the process behind his celebrated convention nominating speech for Bill Clinton:

He started Wednesday’s speech 10 days earlier, jotting thoughts on note cards. “You go to sleep thinking about it, you think in your sleep and wake at 3 A.M. thinking about it. You’re trying to dislodge your mind from the place it’s stuck.” And then, “probably because of terror,” you see where to start. “Oh, my God, here it was, and you don’t stop then. You know you have it. If that happens I can write 10 to 12 hours.” He wrote in longhand, giving it to a friend to type. The Governor can’t type.
“You write a speech different than an Op-Ed piece. I end a lot with periods or pauses or slash marks that aren’t really sentences. I write in talking English. Bill Bradley writes a speech the way you write an essay and read an essay.” Then rewriting. He had a Quayle joke: “Bill Clinton and I agree on all the important things — including how to spell potato,” but cut it. “Too cheap.” He read parts to his son Andrew and aides. He almost dropped the supply-side section, but several of them urged keeping it. Commentators later said that it was the first time anyone made a major audience understand that policy’s failings.
Tuesday night he didn’t sleep. “Your head’s so full.” Noon on Wednesday he rehearsed for a small group. Clinton aides asked him to do more to link the two of them. That afternoon he tied the poor of Hope, Ark., to the cities’ asphalt streets. He added a dozen Clinton references, including, “I want to march behind Bill Clinton in a victory parade.”

Great stuff. “You’re trying to dislodge your mind from the place it’s stuck” is a wonderful way to put it.
And hey, on the day of the big speech, on the fly, why not tie the poor of Arkansas to the cities’ asphalt streets? No problem… if you’re a swell writer.
Here’s Cuomo eight years earlier, talking to the Democratic convention as Republican juggernaut Ronald Reagan ran for reelection. He takes Reagan’s “shining city on the hill” head on:
“There is despair, Mister President, in the faces that you don’t see, in the places that you don’t visit in your shining city.” And: “There are elderly people who tremble in the basements of their houses there.”
At the 5:25 mark he even shows Marco Rubio how to take an elegant water break during a major speech. (But then, that’s the kind of cheap shot that Mario Cuomo himself would have eschewed.)
Cuomo was a fascinating guy who even boycotted The Godfather for 41 years because he didn’t like the way Mafia movies glorified lawlessness and stereotyped Italian-Americans. Unpopular? Maybe. Principled? For sure.
Hats off to a great writer and an American worthy.