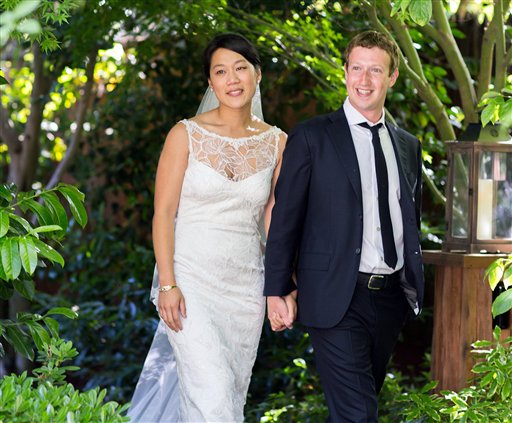 Facebook founder and CEO Mark Zuckerberg updated his status to “married” on Saturday.
Zuckerberg and 27-year-old Priscilla Chan tied the knot at a small ceremony at his Palo Alto, Calif., home, capping a busy week for the couple, according to a guest authorized to speak for the couple.

What a week for Mark Zuckerberg.
That unnamed (but “authorized”!) spokesman also told the AP that the wedding was planned around Priscilla Chan’s graduation date. Facebook’s IPO yesterday was just a coincidence.

The guests all thought they were coming to celebrate Chan’s graduation but were told after they arrived that the event was in fact a wedding.
“Everybody was shocked,” the guest said.
Rather than his trademark hoodie, Zuckerberg wore a suit for the ceremony, while his bride wore a traditional wedding dress.

The couple have been dating since meeting at Harvard nine years ago.
See our biography of Mark Zuckerberg »