I will now reveal a secret I’ve been keeping for the last 20 years about Michael Jackson.

Michael is dead now, alas, so I assume I won’t be creating any nasty legal or ethical difficulties in revealing my little tale.

Back in 1989 I was working as a production manager for Will Vinton Productions, the Claymation people. At the time Will had a very hot shop, thanks to his California Raisins commercials. So hot, in fact, that Michael Jackson called up and asked to be made into a dancing raisin himself.

Due to some kind of nutty legal angle — something about Michael being under contract to Pepsi, I think — Jackson’s image could be used, but not his voice. So a Michael Jackson impersonator was brought in to do the actual singing for the ad.

Now for the little secret, which Will told me about in his office a few months later. Will directed the animation for the spot and went down to Los Angeles for the postproduction sessions with Michael. Jackson was a perfectionist, so was Will, and as they were going through the final sound mix, one thing really bothered them: the impersonator just hadn’t caught the esprit of Michael’s trademark “woo-hoo!”

They fiddled with the sound, trying to tweak it, without much luck. Finally Will turned to Michael, raised an eyebrow, and said “Well, Michael, do you…?” Leaving the question hanging open.

Michael got it and grinned. They had the sound tech set up a mic right there… and Michael did an illicit one-shot “woo-hoo!” They dropped it in right then, telling no one, naturally, since it was less than fully, contractually legal.

And it went out the door that way. A 60-second version of “Michael Raisin” was released in 5700 theaters before going on TV, mostly in a shorter (woo-hooless) 30-second version. 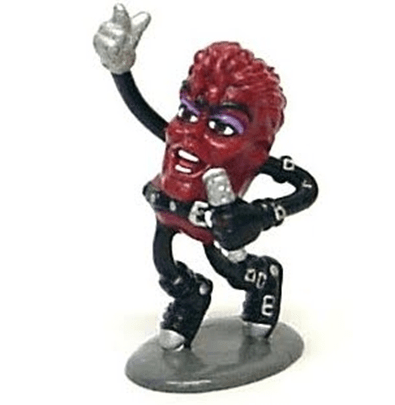 So Now It Can Be Revealed: That’s Michael himself singing a secret “woo-hoo!” in the Michael Jackson raisin ad. You can hear it at just about the 31-second mark in the video above.