Thank goodness we know who Nicki Minaj is endorsing for the U.S. presidency. I mean that.

This is all about how rap artist Nicki Minaj says, in a song on a Lil Wayne mix, “I’m a Republican, voting for Mitt Romney.”

Naturally, this is taken out of context, especially the broader context — that sometimes in popular songs it’s a character speaking, not the artist. But in presidential politics, there’s a comical history of campaigns misconstruing such things. Think of President Reagan embracing “Born in the U.S.A.” by Bruce Springsteen. That’s a pretty chipper, patriotic chorus all right… just don’t listen to the rest of the song, and you’re feelin’ pretty darn good about America.

Not only that, Nicki Minaj publicly applauded President Obama for getting it. 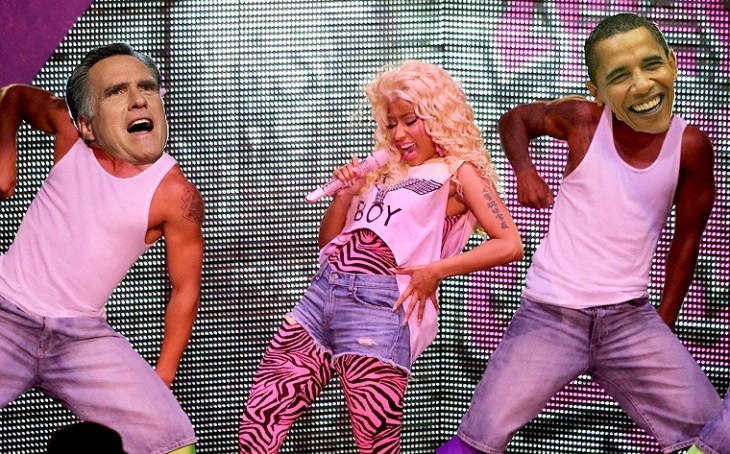 Whew, right? This way, we can all agree on the triviality of the issue — not to mention, scratch our heads and say, “who the heck is Nicki Minaj?”

But think if the news had been different (and it may well turn out to be, yeah?). Think if Nicki Minaj had come out and said, “No, Mr. President, you Marxist Kenyan from Muslin, I really AM voting for Mitt Romney, and I’m telling all my BFFs to do the same.”

Now THAT would be a problem. The Romney campaign would then have to decide what to do with Nicki Minaj. Invite her to perform at the inaugural ball? Lunch with Ann Romney at the dressage clinic? A fundraiser with Rick Santorum?