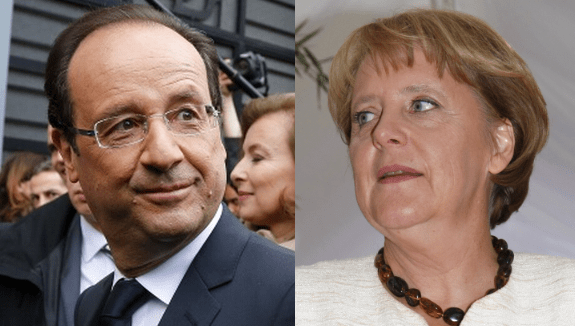 “[Angela Merkel and Nicolas Sarkozy] became so central to Europe’s debt crisis response that they were frequently referred to as “Merkozy”…
Though Merkel’s a conservative and Hollande’s a socialist, people are already now talking about “Merkollande” in hope they will be able to bridge their differences.”

Excuse me, but “Merkollande” is lame. Hollande is a socialist, yes, but that doesn’t mean the nicknames have to be bureacratic.
Why is the press not using the obvious nickname?
Francois + Angela  =  FRANGELA
If first names are verboten (those formal Germans!) what about one of Hollande’s nicknames?  As we learned last week, he is also called Monsieur Marshmallow due to his (formerly) pudgy shape and political presence. So…
Angela Merkel + Monsieur Marshmallow  =  MERKMALLOW
I personally prefer Frangela, but anything is better than Merkollande.