The White House has added Obama-flavored icing to several of the official biographies of former presidents. Doesn’t that make you furious?

It’s true, the official White House site has altered some of the presidential biographies and dropped in positive notes about President Barack Obama.

A list of examples can be found in this opinion piece at Commentary magazine, and of course Breitbart’s all over it, too.

We’re not talking about substantive changes to the bios. It’s not as if the White House has Barack Obama orating at Gettysburg or dropping the bomb on Hiroshima. No, it’s far more banal and cheesy.

At the tail end of the biography for Calvin Coolidge, for example, the White House has added a little something special about President Obama:

Even more egregious, at least to Obama’s Republican foes, are the additions to the bio of Ronald Reagan:

Naturally, this kind of blatant self-aggrandizement opens itself up to parody, and you can see some of that collected here.

It’s clear the change happened sometime since the summer of 2011. The old Coolidge profile from that year doesn’t include Obama. Nor does Obama show up in last year’s entry on Ronald Reagan.

I suppose it’s because it’s an election year, and we’ve grown accustomed to “anything goes” in an election year. This kind of thing is unnecessary, though. Average Citizen or Average Student doesn’t need to be reminded of how awesome President Obama is while they’re reading up on John Kennedy and the history of the Peace Corps.

Maybe President Obama is doing it just to poke his opponents in the ribs: 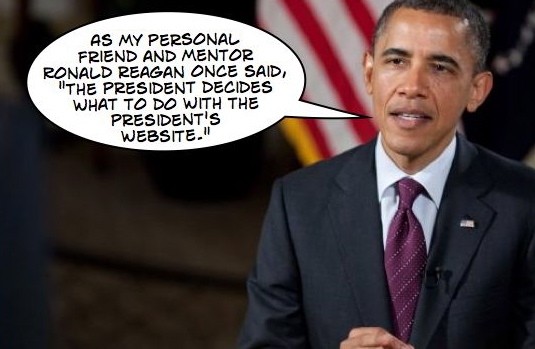 Maybe it’s that the White House website is still evolving as a communications tool. It wasn’t utilized much during the administration of Bill Clinton, although it did offer presidential biographies. The site underwent a major change when George W. Bush was president, but the biographies didn’t change much.

With Team Obama squeezing every opportunity out of modern hot media, I suspect we’ll be seeing more examples of the White House website being used as a campaign tool.

Finally, a nice recap of the history of the White House website, without a section on today’s hubbub, can be found here.