The winningest coach in NCAA basketball history has ended her run. 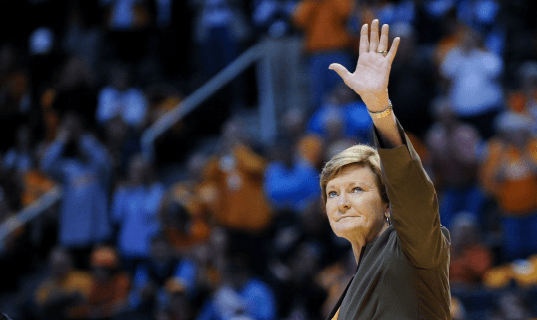 The winningest coach in NCAA basketball history has ended her run.

Pat Summitt has stepped down as coach of the University of Tennessee womens’ basketball program. The decision has seemed likely ever since last August, when Summitt announced that she had early-onset Alzheimer’s disease.

Those close to the program noted that Summitt had good days and bad days during the season.
On her good days, she was assertive and involved during games. On her bad days, she sat on the bench and seemed disconnected from what was transpiring around her.

Pat Summitt said last fall that she’d coach “as long as the good Lord is willing,” and the university left the decision to her to make.
She is moving to a new position as head coach emeritus. Under NCAA rules, she’ll be able to “watch practice, help formulate game plans and interact with players, but she can do no formal coaching.”  She can also do personal mentoring and “life skills coaching.”
[Update: She’s also getting the Presidential Medal of Freedom.]
Her replacement, Holly Warlick, played for Summitt from 1976-80 and has been an assistant coach at Tennessee since 1985.

Pat Summitt ends her run with an amazing 1098 wins and 208 losses. She has been admirably open about her diagnosis.