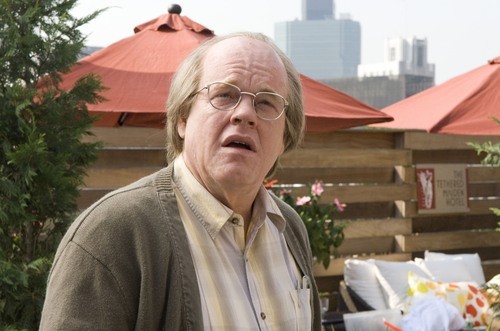 Film reviewer Roger Ebert has named his top 10 films of the last decade — and Philip Seymour Hoffman is in three of them.

Synecdoche, New York (2009), Almost Famous (2000), and The 25th Hour (2003) are the three films. In case you’re not familiar with the third, it’s “A film about the last 24 hours of freedom for Monty Brogan (Edward Norton), a convicted drug dealer.”  And Hoffman?  He’s “a pudgy English teacher, not accustomed to drinking, who makes a devastating mistake involving appearance and reality.”

Synecdoche is the very best film of the decade, says Ebert:

It intends no less than to evoke the strategies we use to live our lives. After beginning my first viewing in confusion, I began to glimpse its purpose and by the end was eager to see it again, then once again, and I am not finished.

One might have a lively argument about whether a film that can be grasped only after multiple viewings (by an expert film critic) can, by definition, be “the best movie of the decade.”

But let it pass. I’m not really knocking the movie, because I haven’t seen it.  I AM doing my level best to knock Philip Seymour Hoffman.

God bless the guy for appearing in many unusual and thoughtful movies.  But as a leading actor, or more precisely as any supposed-to-be-sympathetic figure, there’s no one more unsettling. You can’t root for the guy that way.  It is like rooting for a dentist who is at that moment giving you a root canal without Novocaine.

That’s the PSH Factor — the uneasy aura of flop-sweat, menace, impending doom, and awkward social blunders. Young children should not be allowed to view him. He should have his own MPAA warning: “Rated PG-13 for violence, sexual situations, and Philip Seymour Hoffman.” He’s cast as a leading man, I’m convinced, only by self-conflicted directors who subconsciously want to undermine sympathy for their own movies.

And don’t tell me about Hoffman winning the Oscar as creepy ol’ Truman Capote. That only proves just how horrifying he can be in a lead role.

Now, as Lester Bangs in Almost Famous, he’s perfectly cast.  Because Bangs is an outlier: he’s nice to our teen kid hero, but you also know that if we had time to dig much deeper Bangs would turn out to be very weird.  Perfect for Hoffman.

He’s great in Charlie Wilson’s War, for another example:

Tom Hanks does the heavy lifting of likability as Charlie Wilson — that’s his forte, after all — while Hoffman is Gust Avrakotos, the eccentric CIA agent with the polyester necktie. Perfect use of the PSH Factor.  (In real life, Wilson retired to Texas and married a ballerina. Avrakotos ended up marginalized at the CIA and then died of a stroke. ‘Nuff said.)

So I’m certainly not saying Hoffman is a bad actor.  Just the opposite — he may be too good an actor.  He frightens and disturbs me.  I’m happy to have him appear in my movie-going universe, infrequently, in roles where I don’t have to pin any hopes on him.  I just don’t want him (with apologies to Ebert) as my star of the decade.

So, directors of America, please keep Philip Seymour Hoffman busy with juicy “offbeat” supporting roles, and don’t even think of casting him as any kind of sympathetic lead in this coming decade.  Is that so much to ask?