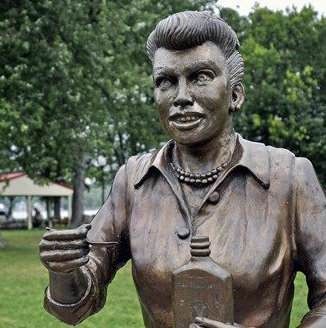 It’s been called hideous. Frightening. Deranged. Scary.
All of which make the famous Lucille Ball statue of Celeron, New York the absolutely perfect tribute. Nobody could ever capture the horror that was Lucy better than this work of art. It’s the greatest salute to truth-telling in statuary since the Lincoln Memorial.
Loathe Lucy? You’re not alone. We stated the case against Lucy in this space nearly four years ago:

She is supposed to be EveryWoman — the clown in all of us. But to me, the Lucy of “I Love Lucy” is not a clown but an idiot — an idiot who is not clever, attractive, amusing, charming, or even likable. Her voice is the piercing squeal of bad brakes. In every show she reverts to the same dumb trick, getting into trouble and then trying to hide it from Ricky, from her boss, or from whomever is unlucky enough to be in the vicinity.
And every show ends up with Lucy bawling in her hideous, blubbering way, while Ricky looks on in dismay. As well he should! His life partner is literally good for nothing, as she herself admits.

This is the cringeworthy Lucy that sculptor Dave Poulin was brave enough to depict in the sculpture he did for Lucy’s very own hometown! “From the day of its installation, I have… always believed it to be, by far, my most unsettling sculpture,” he recently said. Truer words were never spoken! 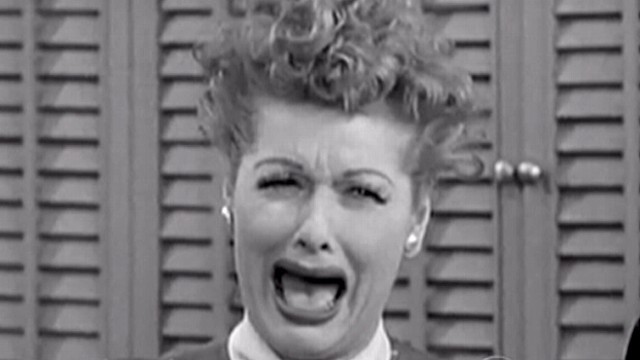 Now this frighteningly accurate portrait of the Real Lucy is under attack by those who would cover the truth with a buffed-up lie. These people would prefer a Soviet-style “heroic” sculpture of Lucy in which her face is changed to something prettier. Phagh! Blasphemy! Perhaps they’d also like to replace her bottle of Vitameatavegamin with a Soviet flag for “Old Red” to wave instead?
No, citizens! They shall not rebronze the awful truth! They shall not win!
To support our cause, we have hereby created a Save The Lucy Statue page on Facebook. Please feel free to visit and leave your own stories of why you hate Lucy — and why the statue should remain exactly as it is.
Save the Lucille Ball Statue in all its hideously accurate glory!

Tags: Controversies I Love Lucy Lucille Ball Statuary Truth
Paul Walker Was Stolen from the Past and Rebuilt Digitally for ‘Furious 7’
Laverne Cox Was Born in 1972, We’re Pretty Sure