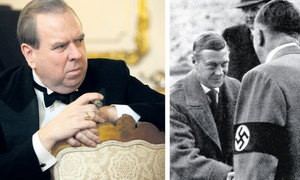 The Guardian tees off on The King’s Speech, George VI, Edward VIII… and Winston Churchill into the bargain:

In point of fact, Churchill was — for as long as he dared — a consistent friend of conceited, spoiled, Hitler-sympathising Edward VIII. And he allowed his romantic attachment to this gargoyle to do great damage to the very dearly bought coalition of forces that was evolving to oppose Nazism and appeasement.

…it seems that we shall never reach a time when the Churchill cult is open for honest inspection. And so the film drifts on, with ever more Vaseline being applied to the lens.

One thing on which we can all agree: Timothy Spall really was completely wrong as Churchill. A fine actor, but a swing and a clean miss on that one.